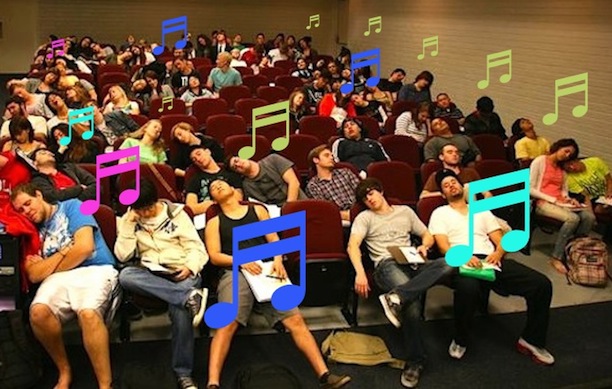 Pop songs were originally supposed to be short. When the New Seekers released their 1971 single ‘Never Ending Song of Love’, nobody bought it in the belief that it would literally play ad infinitum. But while many artists in the history of pop music have been happy with the limitations of the three-minute single, others have seemed hellbent on putting our attention spans through the wringer. The 1970s were a particularly exhausting time, with prog-rock bands like Yes and ELP habitually filling the whole side of a vinyl album with one 20-minute “song”, and American outfits like the Grateful Dead and the Allman Brothers playing endless stage jams to somnolent fans.

Four decades on, the Flaming Lips have trumped all those acts by recording a song that plays for six whole hours. The Oklahoma band has released the megaditty, ‘I Found a Star on the Ground’, on a USB stick with a limited-edition psychedelic toy called the Strobo Trip. “I wanted there to be some type of music that you could play while you played with this toy,” explains the Lips’ unashamedly eccentric singer, Wayne Coyne, adding that the result is like “the Velvet Underground meets Super Mario Brothers”.

The song became a charity project when the Lips asked fans to pay $100 apiece to have their names mentioned on the recording, with the money going to an Oklahoma humane society and a local music academy. So at various points in the song – a relentless slab of noise that regularly makes you fear for the drummer’s health – you hear the band’s special guest, Sean Lennon, intoning donors’ names over a telephone. One excited fan who heard his name in the song remarked that it “sounded like the ghost of John Lennon radioing from a submarine”.

Coyne himself admits that the idea of a six-hour song is “pretty ridiculous”. But how do you fancy listening to a nine-hour rap? Back in April, a Guinness World Records official was present in Las Vegas to witness Chidera “Chiddy” Anamege, of the hip-hop duo Chiddy Bang, complete the longest-ever freestyle rap. Chiddy spouted his ad-lib rhymes for nine hours, 18 minutes and 22 seconds. The inevitable tedium was mixed with a palpable fear that he would suddenly dry up and fail in his attempt to beat the previous record of nine hours, 15 minutes and 15 seconds, held since 2009 by the US rapper M-Eighty. Fortunately, Chiddy had kind people sending him suggested topics via Twitter. During his epic performance, he managed to name-check Barack Obama, Abraham Lincoln, Lady Gaga, Donald Trump, Pokémon and Wikipedia, and appeared to reveal an obsession with food, mentioning peanut butter, Doritos, swordfish, corn on the cob, pumpkins, dumplings, waffles and falafels.

The hymn boasts 754 verses, and would take an estimated five hours to sing

Another record-breaking epic, in an entirely different musical genre, still awaits its first public performance. In the 1990s, the New Zealand writer Carolyn Ann Aish finished writing a mammoth hymn, ‘Sing God’s Song’, boasting 754 verses. Spanning the Bible from Genesis to Revelation, it trounced the previous record for the longest-ever Christian hymn, held by the 12th-century monk Bernard of Cluny. When I traced Carolyn Ann Aish, now a widow in her sixties, she explained her original motivation. “When I was about 14, the longest hymn came to my attention, and I could not believe that someone hadn’t broken an 800-year-old record,” she said. She recalls that an Anglican minister, somewhere in England, once contacted her with big plans to perform Sing God’s Song all the way through using a choir and orchestra. She estimates that it would take “about five hours” to sing. Sadly, her world premiere never came to pass. “The plans terminated with the minister becoming sick with cancer, and his demise.”

When it comes to sheer running time, if not entertainment value, there are some extraordinary instrumentals that knock all of these long songs into a cocked hat. One is playing right now in an old church in the German town of Halberstadt. In fact, as the Flaming Lips were getting deep into their six-hour song in early September, this piece of music was celebrating the 10th anniversary of its opening bar. It is the result of a bunch of German intellectuals adapting a piece called ‘As Slow as Possible’ by the experimental composer John Cage for church organ. Halberstadt had a famous pipe organ installed in 1361 – 639 years before 2000 – so they decided Cage’s piece could be made to last for another 639 years. The piece started playing in 2001 and is due to finish in 2640.

Fortunately, there is no long-suffering skeletal organist sitting at a keyboard: the organ is just a collection of pipes blown by electric bellows. Some of the chords continue for more than a year at a time, and when they need to change, new pipes are brought in and added to the instrument. “Half of the people in Halberstadt think it’s verrückt – crazy,” the chairman of the project, Professor Rainer O Neugebauer, tells me. “When we started it, the first three pipes had a very high tone, and people living near the church complained because of this ‘wooooo!’ noise going all through the night. So we had to build a Plexiglas case round the organ.” The music continues thanks to donations from the public, says Neugebauer, and young people are being recruited to take over when the current board members become too old to continue.

But there is another strange piece of music, much closer to home, with an even longer span. This is ‘Longplayer’, a 1,000-year composition that has been playing since the start of the current millennium, and is the brainchild of Jem Finer, a founder member of the Pogues. Anybody expecting a nice tune like Fairytale of New York will be disappointed: a computer-generated ambient piece made using Tibetan singing bowls, it sounds more like Brian Eno on Mogadon. Much more than a mere piece of music, ‘Longplayer’ is a work of conceptual art that has been said to raise questions “about the notions of time” and to “reduce the vertiginous fear of infinity”. Drifting along on Apple Macs in the old lighthouse at Trinity Buoy Wharf in London’s Docklands, it can be heard “live” at listening posts around the world and over the internet, and is scheduled to finish as the bells ring in the year 3000 – at which point it will start all over again. Whatever you do, don’t tell the Flaming Lips: you’ll only give them ideas. ♦

Comments for: WHO WANTS TO LISTEN FOREVER?