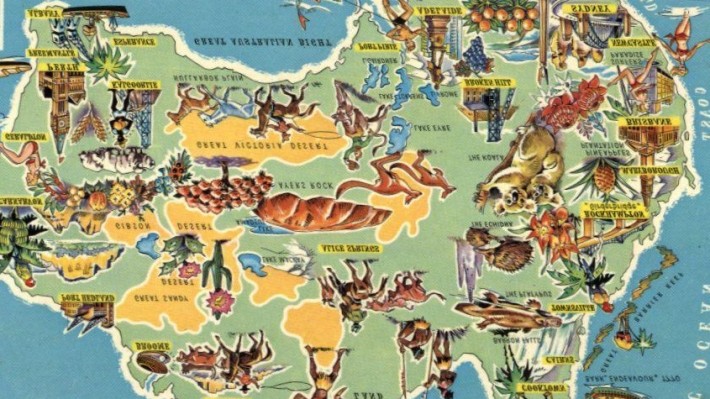 Tony Barrell used to say he’d never met an Australian he didn’t like. Can you tell how he feels now?

I was digging for fun in the garden one day, as a young boy in soiled short trousers, when my mother said: “If you keep on digging, you’ll reach Australia.” Her remark was probably a ploy to stop me digging, for fear that I might uproot the roses or nasturtiums, but it had the opposite effect, and I carried on for a while. I must have stopped at some point, because I failed to get through to any kangaroos or koalas that day.

I was already fascinated by Australia, and particularly by Australians. I was a big fan of a television puppet show called The Tingha and Tucker Club, and I was also fond of a certain Australian TV star who sang funny songs and did incredibly quick paintings. But we’ll come to him later. As a teenager I enjoyed the famous “Bruce” sketch by Monty Python, featuring an amusing bunch of Australian philosophers (or so we were led to believe) with stereotypical corks dangling from their bush hats. This sketch, sadly, became the basis for my later attempts at impersonating an Australian accent.

When I grew up a bit more and started work, I was lucky enough to know an Australian as a work colleague. His name was Steve, and he could not only recite huge chunks of Monty Python, but he had tons of Australian slang expressions to share with me. After he left and returned to his homeland, we remained penpals for a few years. Subsequently, after I became a journalist, I found two more Australian workmates, Scott and Steph. Steph was even more exotic than all the Australians I had met, because she came from Tasmania, where I had previously believed only Tasmanian Devils lived, and cartoon ones at that. One of the best hairdressers who have ever attacked my hair is Australian, too: a bright, artistic woman called Rachael who has tolerated my mangling of that accent, and has patiently explained the meaning of words such as “bogan” to me.

It was in the 1990s, I think, that I started using the line: “I’ve never met an Australian I didn’t like.” This wasn’t a kind of positive racism: this was a recognition that there was something about the attitudes and manners of Australians that I found appealing. Despite that old joke about the difference between live yoghurt and Australians, I thought they did have a distinctive culture. I felt there was a certain adventurousness about these people (which was perhaps unsurprising, as the only ones I knew had travelled all the way here, to the other side of the world), a devil-may-care openness, and a special kind of humour. All of these qualities, I thought, were somehow encapsulated in that twangy, musical accent, which sounded a bit like an American’s attempt at Cockney (though nothing like Dick Van Dyke’s unique attempt in Mary Poppins).

When I was commissioned in 2001 to interview Rolf Harris for The Sunday Times Magazine, I jumped at the chance like a overexcited kangaroo. Here was the man who had amused me for so long with his silly songs, his didgeridoo, his extra leg, and his super-quick impressionist paintings of Australian landscapes. I went along to meet him in Putney as he filmed a series of Animal Hospital. The fact that he cared passionately about animals worked in his favour as well, of course.

We got on pretty well, and Rolf answered most of my questions politely and entertainingly. Some of his stories sounded a little over-rehearsed, but I didn’t mind: this was Rolf Harris! I wrote a long, gently mocking but mostly positive piece about the veteran entertainer.

When Rolf ‘s crimes were revealed and he was jailed in July 2014, I felt personally let down. I felt betrayed. A lot of other people told me they felt the same way. But it was even worse than that for me, because this was the first time I had had cause to dislike an Australian. I wondered how Kate Bush felt, too: Rolf had guest-starred on at least two of her albums.

About a month ago I reread my Rolf Harris piece, much of the detail of which I had forgotten after 13 years, and I was struck by my closing two paragraphs. Here they are, exactly as I wrote them, and exactly as they were published:

His more earthly affections become clear when I produce one of his old books – Write Your Own Pop Song, published in 1973. “Oh, wow,” he says, with genuine delight, and spends several minutes poring over some of the cartoons he drew for it. Studying the endpapers, which feature a phantasmagoria of musicians doing various funny things, he starts calling out names from the broadcasting archives – it transpires that each figure is based on a real musician. He points at a long-haired woman plucking the strings of a harp. “She was beautiful,” he declares. “She played the harp on all the BBC orchestral things. She was a lovely woman.” She appears again on page 110, and this time she is whipping off her bra. Nearby is another idealised female, a nude taking a bath atop a grand piano. “God, I used to fancy her,” says Rolf. Her name was Gloria, he says, and she was one of the backing singers known as the Ladybirds. He won’t be drawn further.

This is the hitherto underexplored sexual side of Rolf Harris, and I find it shocking. Not only because he’s a happily married man, but because nearly 50 years after he first appeared on British television, this kindly figure still has the aura of a children’s entertainer, as safe and sexless as Sooty or The Woodentops. It is the point at which the professional Rolf Harris polish seems to come off, exposing a raw vein of primeval bedrock. It happens only for an instant, but it’s a revelation.

Comments for: AUSTRALIANS: A WORLD TURNED UPSIDE DOWN