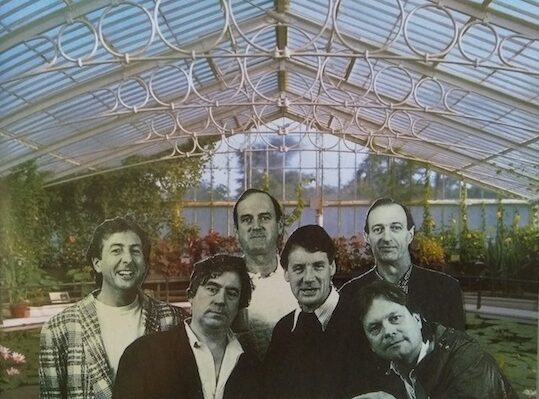 Monty Python was more like a rock band than a bunch of comedians, says Tony Barrell

Blessed are the laughter-makers. Monty Python’s Flying Circus not only transformed the grammar of comedy: the show also enriched the English language in a way that would make Shakespeare emerald with envy, if he hadn’t already fallen off his perch 400 years ago.

Before Python, the words “dead” and “parrot” usually existed in separate sentences, only colliding for the occasional family pet tragedy. If they had never made the sketch in which John Cleese tries to return a stiff “Norwegian blue” to Michael Palin in a pet shop, hordes of broadcasters, sports journalists and politicians would be lost for metaphors. Even the comedically challenged Margaret Thatcher borrowed it once to slag off the Liberal Democrats.

What else, you might ask – paraphrasing the People’s Front of Judea in Life of Brian – has Python done for us? Is this a five-minute argument or the full half-hour? At any moment somewhere in the world, if people aren’t performing a silly walk or looking on the Bright Side of Life (a monster hit at funerals, apparently), they’re going on about Spam or the unexpectedness of the Spanish Inquisition. According to Python’s Eric Idle, Elvis Presley took to addressing chums as “squire” after watching Idle’s legendary Nudge Nudge skit. Just imagine, for a moment, the King of Rock’n’roll chuckling over lines like “Is your wife a goer?”

To say that Python has had its imitators is a bit like saying Princess Diana had a few mourners. If the BBC hadn’t let John Cleese, Graham Chapman, Eric Idle, Terry Jones, Michael Palin and Terry Gilliam start messing about together in 1969, it is very unlikely that Not the Nine o’Clock News, Blackadder and The Fast Show would have seen the light of day. Hell, they have even inspired scientific breakthroughs: in 2000, researchers at the University of Connecticut developed a life-expanding mutant gene in a fruit fly and called it I’m Not Dead Yet, after a similar line of dialogue in Monty Python and the Holy Grail.

Then there’s that word. You know, the one that everybody uses now in place of “absurd” or “surreal”. “Pythonesque”, which entered the Oxford English Dictionary in 1989, the same year that Graham Chapman died, is now hauled out to glorify anything from a bureaucratic cock-up to an own goal by Blackburn Rovers. The word ostensibly defines a narrow, specific genre of humour – and yet the Pythons were incredibly broad in their comedic range. Their genius was to take the instinctual lunacy of Spike Milligan and mix it up with the intellectual playfulness of Peter Cook, and deliver the whole thing in an unsettling mix of live action and animation.

There was a heavy dose of surrealism, and the Pythons were fixated on confrontational sketches set in shops or offices; but they were also fond of parodying the key genres of TV – quizzes, arts programmes, children’s shows, news broadcasts – and there were generous portions of wordplay, iconoclasm, slapstick, drag, silly voices, daft songs and extreme violence. If it made them laugh at their script conferences (oh, to have been a fly on the wall), it went in.

They weren’t even a comedy team. Not really. From an image and marketing standpoint, they were a rock band. They were benignly anti-Establishment, relatively young, and they inspired the kind of devotion normally reserved for heavy-metal groups. They made albums and played gigs – at respectable venues such as the Theatre Royal in London’s Drury Lane, and the Hollywood Bowl – at which young fans would cheer at the opening lines of their famous sketches as if they were hit singles. 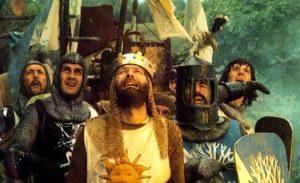 They were on the same record label as Genesis and Van der Graaf Generator, and were fêted by musicians – including George Harrison, who financially rescued their Life of Brian film at the eleventh hour. And it was FM radio that gave the Pythons their initial break in America, which clutched them to its bosom in the 1970s, as it had the Beatles a decade earlier.

Like obsessive rock fans, Python freaks salivate over their heroes’ most obscure material – such as the two shows they made for Bavarian television, for which the Pythons had to speak in German with an Australian accent (try it), and for which Palin had to render ‘The Lumberjack Song’ as “Ich bin ein Holzfäller und fühl mich stark…”

Monty Python sketches seldom had punchlines. They just segued into something completely different, or tailed off – rather like the fades at the end of pop records. And so, as a mark of respect… ♦

Comments for: OH WHAT A CIRCUS!