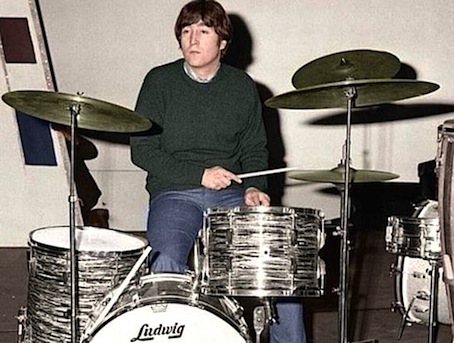 Did John Lennon really knock Ringo Starr’s drumming? Tony Barrell is fed up with hearing about it

While attending a sunny garden party in 2015, I mentioned that I had just written a book about drummers. This prompted a question from a fellow partygoer: what did I think of Ringo Starr? Did I rate him as a talented drummer? I had a suspicion about where this might be leading, and it was quickly confirmed. “… Because John Lennon said Ringo wasn’t even the best drummer in the Beatles, didn’t he?”

It’s a quotation that has haunted me for a while; it won’t leave me alone. Lennon was once believed to have said it at some point between 1968 and 1970, in reply to a journalist asking the question: “Is Ringo the best drummer in the world?”

It’s a witty, sardonic riposte with a dash of cruelty, and it sounds like the sort of thing Lennon might have said

“No. He’s not even the best drummer in the Beatles.” It’s a witty, sardonic riposte with a dash of cruelty, and it sounds like the sort of thing Lennon might have said. It also chimes with Beatles trivia: many fans are aware that when Ringo briefly left the band in 1968, Paul McCartney occupied the vacant drum stool for a while. Listen to ‘Dear Prudence’ on The White Album, or the 1969 single ‘The Ballad of John and Yoko’, and you’re hearing drumbeats laid down by Macca.

The quote has travelled far and wide. I’ve read it in magazines, heard it on television and radio, seen it on the internet, and heard it repeated in offices and at dinner parties. Recent evidence shows it has spread as far as Norway. On May 30, 2015, The Independent blithely quoted the Norwegian writer Karl Ove Knausgaard, who also drums in a rock band, as saying: “John Lennon said that Ringo Starr was not even the best drummer in the Beatles. So it is with me too. At least two of the others in the band are better than me on drums.”

I wholeheartedly believed that one day I would leap into the air in the British Library, screaming EUREKA!

When I began researching the quote a few years ago, I started searching through all the Lennon interviews I could find – in the press, in books, on video, and online. I wholeheartedly believed that one day I would leap into the air in the middle of the British Library, waving a ragged, yellowing page from The Daily Sketch or Crawdaddy magazine like a flag and screaming “Eureka!”

After reaching the conclusion that the ubiquitous witticism may have been misattributed, I searched interviews with Paul McCartney and George Harrison as well. Desperately, I trawled through the utterances of the Beatles’ manager Brian Epstein, and ploughed through transcripts of conversations with their one-time press officer Derek Taylor.

But this was all annoyingly time-consuming, and I had other work to be getting on with, so I put my little obsession aside. Shortly afterwards, I heard that the comedian Jasper Carrott had confirmed that he was the culprit: he had used the joke in 1983, apparently. But I was puzzled when I waded through all the Carrott shows for that year online, because the joke wasn’t there. Then, finally, the Beatles expert Mark Lewisohn found the real source. The joke was used on an episode of the BBC Radio 4 comedy Radio Active, which was written by Geoffrey Perkins and Angus Deayton, in October 1981. So Lennon, who was fatally shot in 1980, wasn’t even alive when the line was delivered.

Scientists are always telling us about the untapped power of the human mind, but let’s not forget that there are untold tons of stupidity in there as well

People must have enjoyed the joke, because countless individuals evidently passed it on. However, some of the recipients may not have known or remembered the original source. “As I heard on Radio Active the other day” is not an especially common conversation-starter. And, I suppose, because it sounded vaguely Lennonesque, it eventually became ascribed to Lennon. Scientists are always telling us about the considerable untapped power of the human mind, but let’s not forget that there are untold tons of stupidity in there as well.

This “famous Lennon quotation” has now joined the long list of utterances that were never actually uttered by the people we thought they were – such as “Play it again, Sam” and “Let them eat cake” (which many still attribute to Humphrey Bogart and Marie Antoinette, respectively). Incidentally, John Lennon never uttered that other “quotation” that circulates on social media, beginning “When I was five years old, my mother always told me that happiness was the key to life.”

So I disillusioned my questioner at that garden party, and I like to think that he will pass the truth on to some of his relatives, friends and acquaintances: it was Radio Active, not Lennon. And I hope that the people who read this blog, or read my book about drummers, will also learn the truth and spread it around even more. You may say I’m a dreamer, but I’m not the only one. ♦

Comments for: PLAY IT AGAIN, JOHN