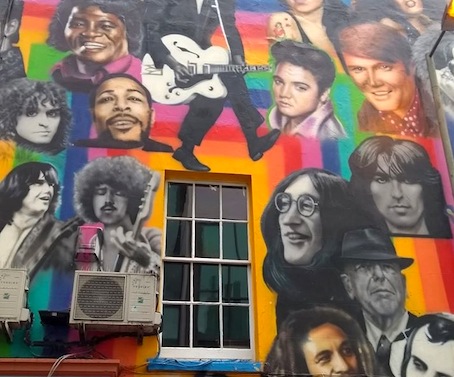 Many dead pop stars are simply not allowed to rest in peace, says Tony Barrell

Pop immortality cuts both ways. If you’re a highly successful artist and you die, you are assured of a long afterlife on CD, DVD, and in the hearts and Spotify playlists of millions. But just as you were continually bothered in life by people wanting a piece of you, so your mortal remains may not be allowed to rest in anything resembling peace. Early in July 2008, a memorial stone for Ian Curtis, lead singer of Joy Division, went missing from Macclesfield cemetery. The stone bears his name, the date “18 – 5 – 80”, when he hanged himself, and the song title ‘Love Will Tear Us Apart’.

Like knife crime, what we might call “pop memorial crime” is far from a new invention. Eight years ago, the graves of Ronnie van Zant and Steve Gaines, two members of the band Lynyrd Skynyrd who died in a 1977 plane crash, were interfered with by persons unknown in Florida. Van Zant’s tomb was opened, exposing his coffin, and Gaines’s ashes were removed from his mausoleum, with some of them spilling on the ground. Their families promptly had their remains securely re-interred elsewhere.

Musicians’ remains are occasionally tied up in legal disputes. When James Brown died in 2007, it took 76 days to bury the Godfather of Soul because of a tussle over his legacy. And the following year, there were calls for the body of the Supremes singer Florence Ballard to be exhumed to settle a serious question. Ballard died aged 32 in 1976, officially as the result of a blood clot, hypertension and heart disease, but her sister Maxine believed she was murdered because she was threatening to expose some of Motown’s darkest secrets.

The only true surfer in the Beach Boys, Dennis Wilson asked to be buried at sea

One surefire way of resting in peace is to be cremated and have your ashes scattered somewhere. After George Harrison died in 2001, the most spiritual of the Beatles is thought to have had his ashes placed in the Ganges – and also possibly the Yamuna, another sacred Indian river. Dusty Springfield, who died in 1999, had some of her crematorial residue sprinkled at a favourite place in Ireland: the picturesque Cliffs of Moher in County Clare.

Dennis Wilson, the drummer in the Beach Boys, had an unusual request fulfilled after he drowned in California in 1984, though it necessitated the intervention of the world’s most powerful man. The only true surfer in the ultimate surf band, Wilson had asked to be buried at sea – a rite that was usually reserved for veterans of the US Navy or Coast Guard. Though it takes some work to imagine President Reagan ever grooving to ‘Good Vibrations’, Ronnie had the regulations waived and 39-year-old Wilson got his wish.

Rumours persist that Freddie Mercury’s ashes went to the land of his birth, Zanzibar, or were sprinkled in Montreux

Other music icons benefit from a certain mystery surrounding their remains. The blues legend Robert Johnson has no fewer than three gravestones in different parts of the Mississippi Delta. He might be buried in a church graveyard near Morgan City, Mississippi, or under a pecan tree north of the nearby town of Greenwood, or in nearby Quito – nobody knows for certain. The ashes of Freddie Mercury are likely to be in the care of Mary Austin, the former girlfriend who inherited his Kensington home. Nevertheless, rumours persist that they went to the land of his birth, Zanzibar, or were sprinkled in Montreux, Switzerland, where he spent many happy hours recording with Queen, or were scattered under a cherry tree in his garden. “Any way the wind blows” may actually have been the way he went.

It has been claimed that Jim Morrison would have preferred cremation, and you can see why. His burial site, at Père-Lachaise cemetery in Paris, has a long history of disturbance by fans of the Doors’ lead singer, who died aged 27 in 1971. At one point the grave featured a bust of Morrison, but that was swiped. Over the decades, obsessives have piled the site with trinkets, chipped at the tombstone and daubed disrespectful graffiti like “This way to Jim” on nearby graves.

One wet autumn morning in 2005, Susanna Griffie, a 46-year-old American Doors fan, used paper and pastels to obtain a rubbing from Morrison’s gravestone. She did it for her then boyfriend, but, as Griffie explains today at her home near Phoenix, Arizona, “When I came back from Paris, I had the rubbing preserved and framed, but the guy I did it for stood me up and wouldn’t accept the gift.” No ordinary rock souvenir-hunter – she is director of operations for the Los Angeles Music Awards – Griffie decided to sell the rubbing as a limited-edition series of prints, “because I just wanted to share this thing with other people who would appreciate it”. Her website JDMRubbings.com offers an individually numbered “James Douglas Morrison” print for $418, including shipping to the UK. Morrison’s surname is underneath his first name on the rubbing, but that’s simply because the French paper she bought was too narrow for the gravestone.

The grave is now closely monitored round the clock, so how did Griffie get permission to start rubbing? She cannot elaborate “for reasons of confidentiality”, she says, but via a series of coincidences, “all the right people just happened to cross my path”. The act may have been no less than her “sacred destiny”, she believes. And she stresses that she carried out a thorough check to ensure there were no legal problems with selling prints of her handiwork. While grave-robbing is clearly wrong, grave-rubbing can pay dividends: she has sold more than 560 prints so far.

A much more shocking conjunction of music, death and art was on the cards recently, when the Berlin-based artist Natascha Stellmach announced that she would polish off her latest exhibition by smoking the ashes of Kurt Cobain in a spliff. The news wasn’t entirely incredible, as it had been reported in 2008 that the Nirvana singer’s remains had been purloined from the Los Angeles home of his widow, Courtney Love. However, a spokesman for Love now says that it was all a mistake: the ashes were never stolen in the first place. “My work revolves around identity,” Stellmach has claimed. But whatever she puffed on as the climax to her show, it was unlikely to be the remains of the god of grunge. ♦