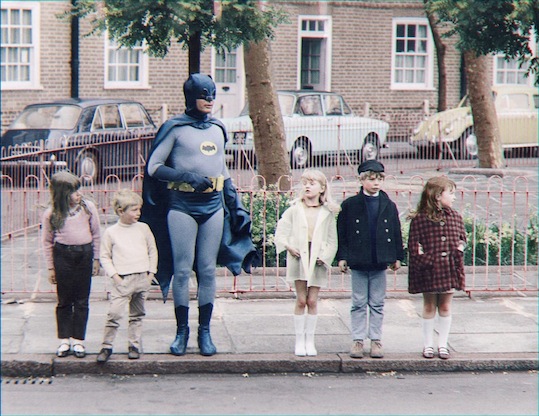 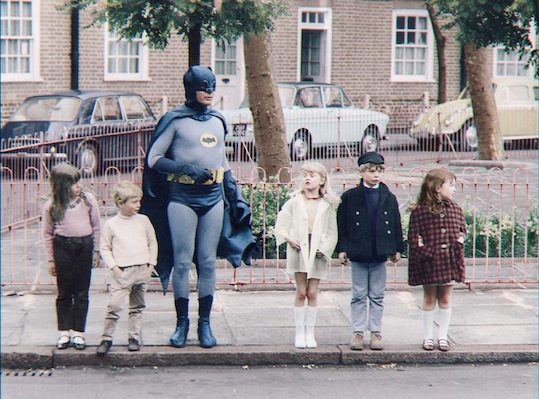 This wonderful photograph shows the actor Adam West playing Batman in the 1960s, and helping a group of children cross the road. You won’t see anything like this nowadays. As soon as I saw the photo, I wanted to know the location. There are two British cars and a Volkswagen Beetle in the picture, and there is a distinct London feel about the buildings. 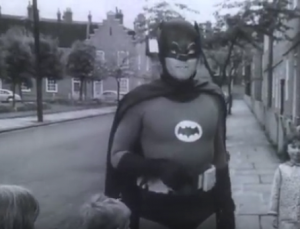 It turns out that West was paying a promotional visit to Britain and making a short road-safety film for British audiences, which surfaced again recently and can be watched on YouTube. A comment there suggested that the location was Kennington in south London, so I looked for clues in the film to confirm that. Towards the end, Batman is standing in this street (pictured right) and there is a distinctive building in the background: a large house with a stepped gable.

If I were Batman, I’d go straight to the big computer in the Batcave, feed it with the words “Kennington” and “stepped gable” and see what popped out. I’m not Batman, so I fed them to a modern search engine, and found an estate agent describing properties recently for sale in Kennington, including “a five-bedroom red-brick house with a stepped gable in Denny Crescent”.

Typing “stepped gable” together with “Denny Crescent” produced some interesting results, including a picture of a house on Pinterest (see below) that is a dead ringer for the one behind Batman. It has a sign for Denny Crescent on its wall, and I believe the same sign can be seen faintly in the film. There are a few very similar houses with stepped gables in this area, but I think this is the only one with a street sign on the right-hand side of its façade. 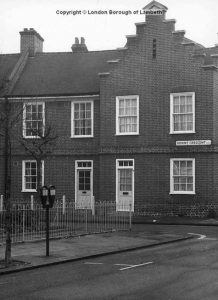 I thought it likely that the road-crossing shot was taken nearby, and that Denny Crescent was a strong contender for the thoroughfare seen behind Batman and the kids, which has a distinct curve. Looking at the crescent now, there’s a very good match for the sash windows, doors and railings in the picture. It’s evident that the Caped Crusader and his young pals are standing on the D-shaped plot of land between Denny Crescent and Denny Road (see map below), and it’s Denny Road that they are about to cross. 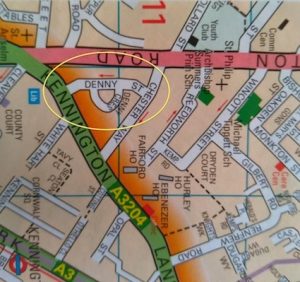 The date of the photograph is said to be Friday, May 12, 1967, between the broadcasts of series 2 and 3 of Batman in the USA. Adam West was 38 years old. The second series had recently finished on UK television (though many repeats would follow later). We were approaching the Summer of Love, and that same day saw the release of the debut album by the Jimi Hendrix Experience, Are You Experienced, as well as the first broadcast of the Beatles’ album Sgt Pepper’s Lonely Hearts Club Band by a pirate radio station, Radio London, nearly three weeks before the record was released. The Beatles had already moved on to new material: on that Friday, further north in Abbey Road, St John’s Wood, they were recording the rather slight McCartney tune ‘All Together Now’, which would appear in the Yellow Submarine film. That evening, Pink Floyd would entertain an audience at the Queen Elizabeth Hall with the world’s first ever “surround sound” concert, using a quadrophonic speaker system.

May 12 was a pleasant spring day, with temperatures of 17 to 19C. Harold Wilson was Britain’s prime minister, and the day before Batman’s London romp, the UK and Ireland had submitted their official applications for membership of the Common Market, otherwise known as the European Economic Community. That alone makes it sound like a very distant age now. ♦

The Batman road-safety film can be seen HERE.

Comments for: THE CAPED CROSS-AIDER