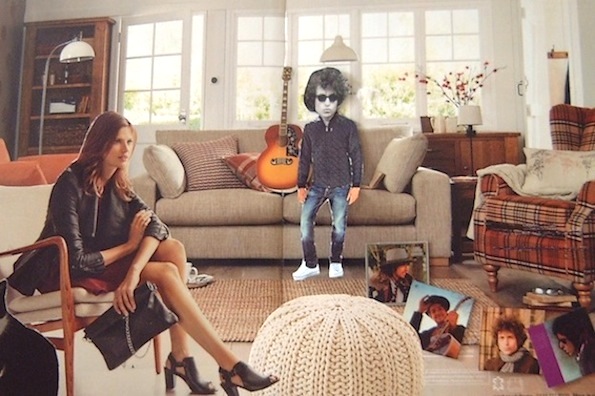 Did Bob Dylan really give an ordinary London couple the surprise of their lives? Tony Barrell heard the story from a reliable source

Back in June 1997 I had a conversation with Dave Stewart of Eurythmics, and the subject of Bob Dylan came up. Dave had collaborated musically with Bob, off and on, since the mid-1980s, and he gave me the funniest story I’ve ever heard about him.

The tale began with the American legend coming to London to meet Dave on his home patch for the first time. Dave lived in Randolph Avenue in Maida Vale and he had given Bob his address, and after Bob landed at Heathrow Airport he apparently relayed the address to the driver of a taxi. But somehow, instead of arriving at Dave’s house, Bob ended up in a road with a similar name – which could have been Randolph Crescent, Randolph Mews, or plain old Randolph Road. He knocked on a door (or rang the bell) at a house there – possibly the correct number in the wrong street. A woman opened the door and beheld the famous personage in front of her, the great poet of popular music, at which point Bob Dylan mentioned that he’d come to see Dave, who was expecting him. It so happened that the woman’s husband was called Dave, and she replied that he was out at the moment but was expected back quite soon. Perhaps the visitor wouldn’t mind coming in for a cup of tea so he could await Dave’s return?

Bob accepted, walked in and sat down. Being American, and the author of the song ‘One More Cup Of Coffee’ (on the Desire album), he might have asked for coffee rather than tea to accompany the Ginger Nuts and Jammie Dodgers that the woman kindly proffered. At some point, the penny dropped and she realised exactly who was sitting before her in her modest house in Maida Vale – especially as her husband was a Bob Dylan fan.

Eventually, after a fair amount of awkward small talk, Dave returned and was introduced to the visitor, whom he immediately recognised. Bob realised then, of course, that this wasn’t Dave Stewart. More awkward conversation ensued, and a couple of album covers may have been signed (I’m guessing Blonde on Blonde and Blood on the Tracks) before Bob showed them the dog-eared scrap of paper with Dave Stewart’s real address on it, and he was redirected.

This anecdote has circulated widely and been printed in books and magazines, and in traditional Chinese-whispers fashion the details have changed and been plausibly embroidered. One variation has Bob looking not for Dave’s house but for his recording studio, a converted Victorian place of worship called the Church, which was in Crouch End – at 145 Crouch Hill. Often it’s said that Dave was a plumber who was out on a job, and that his wife telephoned him to tell him Bob Dylan was sitting in his kitchen. (In that case, she would have had to ring his mobile phone. These were rare among British people in the mid-1980s, though not unknown: the comedian Ernie Wise had made the official inaugural UK cellphone call in January 1985.) The whole story is often dismissed as an urban myth, an apocryphal tale of the kind that happened to the cousin of a friend. However, it was only second-hand when I heard it: Bob Dylan had recounted it to Dave Stewart, and Dave had told it to me. So I believe that it really did happen. 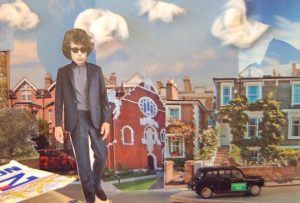 Dave also told me that when Bob came to record some years later at the Church, in 1993, the American superstar would amble around Crouch End during his studio downtime and confuse the local estate agents. He demonstrated more than a passing interest in some of the properties they had on their books, and even went to a viewing. I know this is true as well, because Bob’s behaviour generated a flurry of press reports that he was looking to settle down in London and seeking a house here. Actual starstruck estate agents were named and quoted. In reality, Bob wasn’t serious about buying: it seems that he was just casually curious about the housing stock of London N8 and the sort of bread it went for. One of these days, you never know, the details might turn up in one of Bob’s songs.

One day in 1998, not long after Dave Stewart regaled me with his Dylan stories, I explored north London with a photographer to see if we could find the other Dave and his wife, and we knocked on several likely doors. When we found the actual couple in the story, the photographer would take some lovely portraits of them on their threshold and in their living room, playing Dylan albums and nibbling Ginger Nuts and Jammie Dodgers, and we would publish the story in The Sunday Times. Sadly, though we met some lovely local people, nobody I spoke to had even heard the story, and none of them knew a plumber or any other local man called Dave. Doorstepping is a tedious and soul-destroying business, and we gave up after a while, concluding that it was very possible that Dave and his wife had since left the area.

Later I heard that a north London resident had opened her door one day to discover another talented American in front of her: the actress Gillian Anderson, before her success with The X-Files. When I interviewed Gillian in 2005, she revealed that she had knocked on the door of 19 Rosebery Gardens, Crouch End, and asked the woman living there if she could look round the house, where she had spent part of her childhood. (Although Gillian was born in Chicago, her parents brought her to London as a baby, before taking her back to the States when she was 11.) The actress told me that it was an unpleasant business: “She let me in and two things happened. One was that she was very disturbed by my presence: it was not a good experience for her to have this stranger in the house. Secondly, it was so different than it was when I was growing up; it was quite disturbing. It smashed all my childhood ideals of what it was like.” We can only imagine the Crouch End woman’s surprise years later, when she saw Gillian hunting aliens on the telly.

Anyway, I’d love to hear from the couple who met Bob Dylan on that day in the 1980s. It would be fantastic to record the story from their point of view. Maybe they would finally pose for some nice photographs. Hey, we might even persuade Bob to come back for a big reunion. ♦

If you are “Dave” or his wife, or you know them, I would be very grateful if you would leave a comment below, or email me on [email protected]

Comments for: KNOCKING ON LONDON’S DOOR