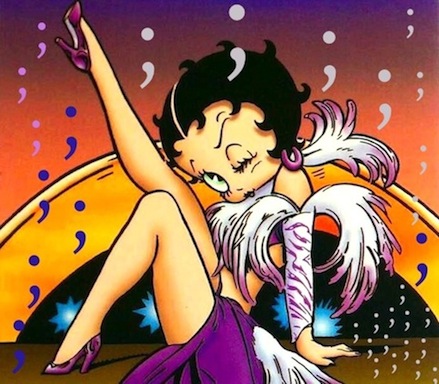 I feel sorry for the semicolon. Ever since it was first printed in the late 15th century, this noble punctuation mark has suffered an onslaught of attacks and abuse. There it sits today on a zillion keyboards, usually beneath its big brother the colon, minding its own business and kindly making itself available free of charge, on an unlimited basis, to any writer who feels like using it; so why does it come in for so much more stick than the full stop, the comma or the question mark?

Harder than a comma and yet softer than a full stop or a colon (Goldilocks adored it), the semicolon is a subtle and sophisticated little symbol that can be used to combine related clauses in a single sentence. And it comes in handy in another specific way, as we shall see later. However, many editors have spoken out against it, and many authors – including James Joyce, Samuel Beckett and PG Wodehouse – have taken pains to avoid using it. In a 2005 book, the late American novelist Kurt Vonnegut, who was a magnificent prose stylist, told his readers: “Do not use semicolons. They are transvestite hermaphrodites representing absolutely nothing. All they do is show you’ve been to college.”

A French satirist dismissed the semicolon as a timid, fainthearted, insipid thing

In 2008 there was a big fuss in France over the semicolon, which they know as the point-virgule (stop-comma). Although much of this brouhaha exploded suspiciously on April 1 (which is celebrated as a day for silly pranks in France as it is elsewhere), both semicolonists and anti-semicolonists weighed in with passionate views. A French satirist quoted in the international press dismissed the point-virgule as “a parasite, a timid, fainthearted, insipid thing, denoting merely uncertainty, a lack of audacity, a fuzziness of thought”.

Criticism like this displays a kind of punctuative racism; it suggests that the semicolon is inherently at fault, whereas the truth is that when it annoys people, the fault lies with the manner in which it has been used, and therefore with the user. Yes, the semicolon can certainly be misused and overused. If you see it dozens of times in one sentence, it jars – as excessive repetition of anything else jars. Oh yes, oh yes, oh yes, oh yes. But there’s another reason why the semicolon has become unpopular in the modern age.

When millions of people started using email in the late 20th century, many of them seized on this innocent character to create an early emoticon, one that allowed them to suggest that they were winking as they wrote, like this ;–)

Now, I don’t have a problem with actual, physical winking when it’s done properly in an appropriate context. Cheery cockney geezers can use it to express friendship as they enjoy a pint and a joke together. And winking between lovers can be intimate and sexy, because the subtle, subliminal message it sends is this: “Even if I look at you out of just one of my eyes, you are stunningly beautiful. When I close both of them, you are still beautiful. And when I restore my normal human binocular vision, you’re a total knockout, baby.”

Winking is hazardous. Try doing it in a job interview, or at the supermarket checkout

However, winking is hazardous, because it potentially gives off a whole range of signals and can misfire badly, as when Anne Robinson did it in The Weakest Link (The Creepiest Wink). If you doubt this statement, try winking a few times during a job interview, or at the supermarket checkout, or over dinner with friends, or the next time you get a professional massage. Winking is an unreliable code. Thus, as with momentarily closing one eye in real life, the motivation behind a virtual wink – a wink in an email or Facebook message, for example – is often unclear: is this person being flirtatious with me, are they joking, or are they hinting at something they dare not express using normal language – such as a dark personal secret? And do they think I know the secret already? Bloody winkers.

It’s not the semicolon’s fault that it has acquired a dodgy reputation after being adopted by so many unwise virtual winkers. When little boys were pushed up chimneys by burly Victorian men, the boys weren’t to blame, were they? And if only the winkers would stop using the semicolon in this way, they might discover that it is amazingly useful in one particular situation. It’s a situation that is routinely ignored in exaggerated press reports on “the death of the semicolon”, and that’s probably because assignments like this are usually thrown at young office interns, whose lack of erudition and experience prohibits them from appreciating the singular usefulness of the point-virgule.

What is this singular usefulness, you may ask; what is the great linguistic purpose for which the maligned semicolon is arguably indispensable?

It’s the complex list – a list in which all or some of the elements require information that necessitates commas. For example, if you go shopping for half a dozen eggs, some rice, some tomatoes and some chilli peppers, you don’t need any semicolons. But let’s imagine you’re not in Lidl but in Waitrose, you’re a fussier customer and you want half a dozen eggs, preferably free-range; rice, but not Basmati or brown rice, if you can help it; medium-sized tomatoes, ideally still on the vine, though off-vine ones would do at a pinch; and some chillies, either fresh red ones or dried red ones, but not green. Semicolons clearly come into their own here. You could replace them here with commas, but the prose would then lack the finesse provided by the semicolons, which create clear divisions between the items on the list. If you try to write a complex list without semicolons, you risk creating an incoherent torrent of words, indistinguishable from the verbal outpourings of an overexcited four-year-old or a teenage crackhead.

Next time you have to write a complex list, you know which punctuation mark to call on

It’s not just about shopping. There are many other situations in which you might wish to construct a complex list and punctuate it clearly. Here’s one: “The Monty Python team included Terry Gilliam, who has directed several award-winning films, including Brazil and The Fisher King; John Cleese, who co-created and starred in Fawlty Towers with Connie Booth; Eric Idle, who went on to create Rutland Weekend Television, the Rutles, and Spamalot; Michael Palin, now better known as a TV globetrotter; Terry Jones, who died in January 2020; and Graham Chapman, who died in 1989.”

So, next time you have to write a complex list, you know which punctuation mark to call on. Otherwise, it’s a good idea to be sparing in your use of the semicolon; don’t use it all over the place; that’s not what it’s for; it very quickly becomes irritating; and, whatever you do, don’t be a virtual winker ;–)

By the way, later in the very same book in which he slagged off semicolons, Kurt Vonnegut used one in a sentence, and then remarked on the fact that he had used it. “It is to make a point that I did it,” he wrote. “The point is: Rules only take us so far, even good rules.” ♦