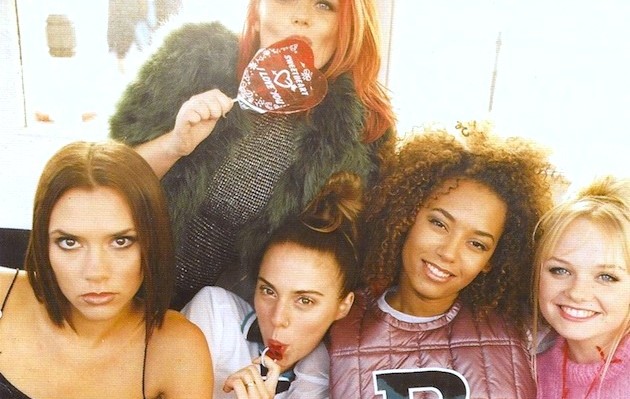 How did the Spice Girls get their famous nicknames? Tony Barrell reveals all

They were the band who wielded Girl Power, whatever that was. But the gimmick that really boosted the popularity of the Spice Girls was their collection of distinctive nicknames. When the band appeared from nowhere in the 1990s, people who failed to memorise their real handles – Geri, Victoria, Emma, Mel B and Mel C – could easily trot out their alternative monikers: Ginger Spice, Posh Spice, Baby Spice, Scary Spice and Sporty Spice. It looked like a masterstroke of branding and marketing – except that it was entirely unplanned.

For a bit of fun, some head-shots of the girls were superimposed on a photograph of five kitchen spice jars

The story begins in early 1996, when the BBC’s Top of the Pops magazine decided to publicise the up-and-coming band. The magazine’s dapper, dark-haired young editor, Peter Loraine, met the girls over lunch on a roof terrace in London’s Notting Hill. Years later, I interviewed Loraine for The Sunday Times and he explained what had happened. “The record company, Virgin, had brought the band to woo us,” he said. Later, back at the magazine office, Loraine and a small team conceived a feature to introduce the band to their young readers. “We’d given the magazine its own language: we used playground-speak and made words up, and we didn’t call stars by their real names. For example, there was this band at the time called the Nightcrawlers, and we’d call the singer Mr Nightie.”

For a bit of fun, some head-shots of the girls were superimposed on a photograph of five kitchen spice jars. “And I said, ‘Let’s give them names. What are we going to call them?’ ” Over the course of several minutes of collective brainstorming, the now-legendary nicknames were coined.

Mel B became Scary Spice mainly because she had sat on my knee during that lunch. She was quite intimidating

“I think Posh Spice was the first one,” recalled Loraine, “the joke being that she so wasn’t posh – she was from Essex – but she had a black Gucci dress on and pouted all the way through that lunch. Mel B became Scary Spice mainly because she had sat on my knee during the lunch; she was quite intimidating.” There were several rejections before they emerged with the final names for the feature. “Ginger Spice was Saucy Spice at one point, and Mel C we were going to call Scouse Spice.”

While the various Spices split up, went solo, had babies, regrouped and split up again, Peter Loraine went on to bigger and better things, becoming the manager of artists such as the amazing Goldfrapp.

But it’s a wonder that the nickname trick hasn’t been properly exploited by later bands. For instance, I can never remember the individual names of a certain mega-successful boy band, but it would be an entirely different matter if we could call them Blond Direction, Smiley Direction, Grumpy Direction and Gormless Direction, don’t you think? ♦