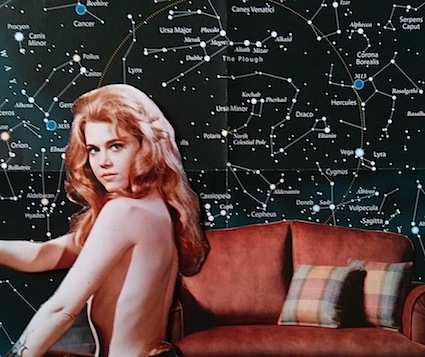 How different would Jane Fonda’s extraordinary life have been if she hadn’t fallen head over heels for Roger Vadim? When their two worlds collided in 1963, Fonda was an impressionable American actress who might only say “boo” to a goose if it was in a movie script. Vadim was a notorious French film director who defied social conventions, slept around, and liked his actresses to be déshabillé if not totally starkers on screen. He also fancied himself as a left-wing intellectual and would often express his caustic opinions on the Vietnam war.

If she had never entered his orbit, Fonda might have kept more of her clothes on during her illustrious film career. She might even have skipped her Hanoi Jane liberal-activism phase altogether, and gone straight into exercise videos.

One of the most intimate accounts of the Fonda-Vadim marriage comes from the Welsh-born photographer David Hurn. One day in 1967, Hurn answered a call from a publicist on a promising-sounding science-fiction romp called Barbarella, which was being produced in Italy by Dino De Laurentiis. “They’d been having quite a tough time with Jane,” recalls Hurn. “She’s slightly difficult to photograph when she’s uptight. They asked me if I’d come to Rome and work with her. So that’s what I did. As luck would have it, we hit it off straight away – and I hit it off with Vadim too. I ended up spending about nine months with them.”

They stuck her in this cage with all these birds, and made loud noises so they would get frightened and flap around her

Hurn photographed Fonda in her whole wardrobe of sexy “astronavigatrix” outfits, and says the 29-year-old star and her 39-year-old husband were “very trusting and incredibly generous to me. At one time on the movie, I had my photographic equipment stolen. They went to the trouble – without telling me – of finding out exactly what it was and buying all new equipment. We’re talking Leicas, which are not cheap.” 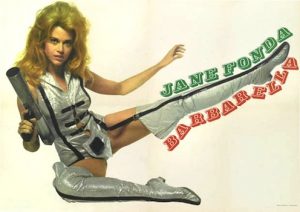 By contrast, Hurn also witnessed the unkindnesses that Vadim, Barbarella’s director, put his wife through in the making of the cult movie. “They stuck her in this cage with all these birds, and then made loud noises so the birds would all get frightened and flap around her. That must have been really awful. And there’s a scene where she slides down a tube, and she ended up with her skin ripped because of the friction. But she was an unbelievable trouper: she just got stuck in and got on with it.”

The original Barbarella was a sexy comic strip, first drawn by Jean-Claude Forest for a French adult publication, V-Magazine, in 1962. Vadim’s involvement in the movie adaptation is interesting, because Forest’s pouting blonde cartoon character was visually inspired by Vadim’s ex-wife Brigitte Bardot. Not only that, but the French “sex kitten” had actually been offered the movie role and had turned it down.

Barbarella’s most famous sequence is Fonda’s weightless strip routine, coyly obscured by the opening credits. “I personally felt that Jane was rather shy about taking off her clothes,” says David Hurn. “I don’t know if she minded it when she felt it was genuinely in the context of the movie – and perhaps she was easily persuaded that it was in the context of the movie.”

Fonda later remembered the movie as a traumatic experience: “There I was, a young woman who hated her body and suffered from terrible bulimia, playing a scantily clad – sometimes naked – sexual heroine. Every morning I was sure that Vadim would wake up and realize he had made a terrible mistake – ‘Oh my God! She’s not Bardot!’ ”

After Barbarella wrapped, Fonda and Vadim invited Hurn to travel back to France with them in their hired jet. By this stage, they had set up home in a honey-coloured stone farmhouse 37 miles west of Paris, in the hamlet of Saint-Ouen-Marchefroy. She had had the interior thoroughly renovated, installing Biedermeier antiques and an arty Roy Lichtenstein rug.

“I think she seriously thought then that she was going to live permanently in France,” says Hurn. “She suddenly decided they were going to have their own woods outside, and she brought all these fully grown trees in on lorries.” Hurn marvelled as towering poplars, maples and birches trundled into the grounds. “It was as if she wanted to have her roots instantly there.”

Fonda says in her autobiography, My Life So Far, that Vadim was the first man she had ever truly loved. He clearly had something going for him. Roger Vladimir Plemiannikov, to give him his full name, was an odd-looking Franco-Russian with a long face, a big nose and tombstone teeth. And yet his amorous conquests, apart from Fonda and Bardot, included Catherine Deneuve and the Danish beauty Annette Stroyberg. Writers have frequently trotted out the cliché of “Gallic charm” to explain Vadim’s power over some of the most stunning women on the planet.

Hurn found him “incredibly charming – he wouldn’t dream of not getting up and holding a woman’s chair for her when she sat down”. But Vadim’s chivalry and politesse came mixed with sexual libertarianism. Shortly after meeting Fonda, he laid down his ground rules. “I told Jane that I am incapable of making love to one woman all my life,” he revealed in an interview. “‘If I have a sex adventure,’ I said, ‘I will not lie to you. But one thing I promise you: it will not be important.’ ” That must have put her mind at rest, then.

Hurn says he was wary of Vadim’s philosophy of promiscuity, and refused to take part in the “games” that went on in the Fonda marital home. “Vadim justified it all intellectually, saying the idea of being faithful to someone was absolute nonsense. But I don’t like it when people try to impose their views on you. I put up the shutters.” But the photographer says he did join in some of the debates raging in the Fonda-Vadim circle about the situation in Vietnam. “At the time I knew Jane, she was wavering. She was still very pro-America, but Vadim’s friends were all left-wing and I think she was being persuaded.”

As the 1960s came to an end, so did Fonda’s European adventure. Her first marriage would go the way of myriad showbiz relationships. Change was already in the air for her in 1968, the year of Barbarella’s release. As Fonda recently explained to Oprah Winfrey, she was sitting in her French farmhouse – pregnant with Vanessa, her daughter by Vadim – and “living this fun but rather empty life” when the television showed Americans demonstrating against the Vietnam war. It would soon be time for Barbarella to morph into Hanoi Jane. ♦