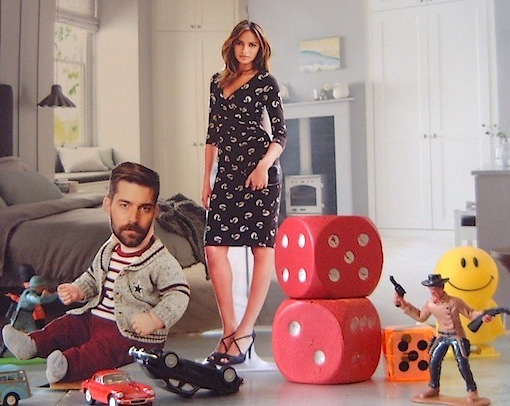 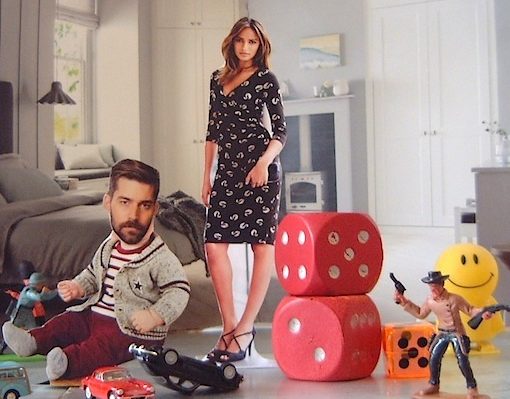 The expression ‘toy boy’ has a long and peculiar history. Tony Barrell reports

When a woman is dating a man who is significantly younger than her, it doesn’t take long before someone refers to him as a “toy boy”. The phrase has been in common parlance in Britain, and other parts of the world, for decades. Dictionaries claim it started doing the rounds in 1981, and I remember the tabloid press seizing on the expression and flogging it to death in the mid-1980s. In a 1985 episode of Only Fools and Horses, Del Boy, Rodney and Uncle Albert are lamenting the state of their finances when Albert pipes up: “I was reading in the Sunday papers about them fellas what pick up with these rich old widows – what they call ’em? Toy boys! You wanna see the stuff they pick for presents: solid-gold watches, sport cars… money! Might be worth considering.”

Two years later, in the summer of 1987, Sinitta took the song ‘Toy Boy’ into the charts. “He’s my plaything and I love him,” enthused the 23-year-old singer about her mythical mini-man in the Stock Aitken Waterman ditty. And the words “toy boy” continued to gain popularity through the 1990s, so much so that they were casually applied to chaps who were just a few months younger than their wives or girlfriends. Language is an empowering thing, and now that there was a catchy and amusing label for junior male lovers, people suddenly felt justified in getting all judgmental and curtain-twitchy about age-difference couples.

John Lennon wrote a poem called The Toy Boy, which was published in 1966 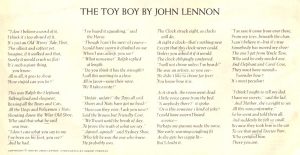 Of course, “toy boy” is such an obvious marriage of two very old rhyming words that it couldn’t possibly have remained undiscovered and unused by English-speakers and writers until 1981. And there were two interesting public uses of the term in the Swinging Sixties. In 1961, young British television viewers were treated to the first episode of the sci-fi puppet drama series Torchy the Battery Boy, in which eccentric and lonely old Mr Bumbledrop decides to assuage his loneliness by making an artificial companion for himself – “A toy boy!” he exclaims as he sets about his task. The result is the title character, Torchy, an odd-looking little electrically powered fellow with a magic beam.

A few years later, John Lennon wrote a comical poem called ‘The Toy Boy’, which was published by a magazine in 1966 (above). The verse (the text of which didn’t include the title phrase) received favourable comparisons to the work of Lewis Carroll and TS Eliot. Not long after his poem was printed, Lennon would take up with Yoko Ono and become a toy boy himself, being more than seven years younger than the Japanese artist.

But “toy” and “boy” had already been shoved together back in the 1910s by American marketing men. Looking to plug a German-American beer called Edelweiss, a Chicago advertising agency devised a series of Toy Boys – cartoon figures of little men playing a range of sports, including tennis, golf, billiards and American football. They appeared as cardboard cutouts in window displays, on billboards, in newspaper ads and on novelty stamps (below), and were every bit as familiar as the meerkats and irritating opera singers of modern UK commercials.

These Toy Boys, said a 1919 trade magazine, “are inseparably associated with Edelweiss and are now so well known that they would accomplish their purpose without the name of the beverage appearing”. There was no evidence, unfortunately, that any of these sporty little fictional men had become romantically attached to older women.

But mention “toy boys” to Americans nowadays and you’ll receive a blank look. In their topsy-turvy version of the English language, people across the Atlantic describe younger male lovers as “boy toys” instead. And that’s not even what “boy toys” used to mean. Confused? You’re not alone.

Back in the early 20th century, when Americans talked about “boy toys”, they were usually referring to gadgets and other hardware that appealed chiefly to men. Guys salivating as they leafed through catalogues of boy toys were looking at serious hardware – wrenches, lathes and suchlike. Then Madonna came along and changed everything. In the early 1980s, just around the time that “toy boy” was starting to spread in Britain, the singer began wearing a belt featuring the words “BOY TOY”. She sported it over a wedding dress when she sang ‘Like a Virgin’ at an MTV-awards event in 1984 (below). 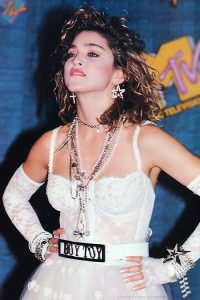 Back then, it was clear that she was using the phrase to market herself as a risqué plaything for members of the opposite sex (the significant word in that song title being “Like”). However, the meaning of the phrase “boy toy” has since morphed, and it now generally refers to the younger male lover of an older woman – the same thing as a British toy boy. And as she has grown older, Madonna has confused things good and proper by hooking up with “boy toys” of her own, such as the dancer Timor Steffens, who was 26 when he dated Madge in her mid-fifties in 2014.

So there you have it – the peculiar history of the toy boy, from American advertising to neighbourhood gossip and tabloid scandals – via the poetry of John Lennon, British TV puppets, and the career of Madonna. Those two little words have been on some journey. ♦

Tony Barrell is a writer, pop historian and etymologist who has investigated other popular expressions, such as “litterbug”, “hunky dory” , “hanky panky“, “Planet Zog“, “over the moon”, “without further ado”, and “laughing all the way to the bank”.

Comments for: TOYS AND GIRLS