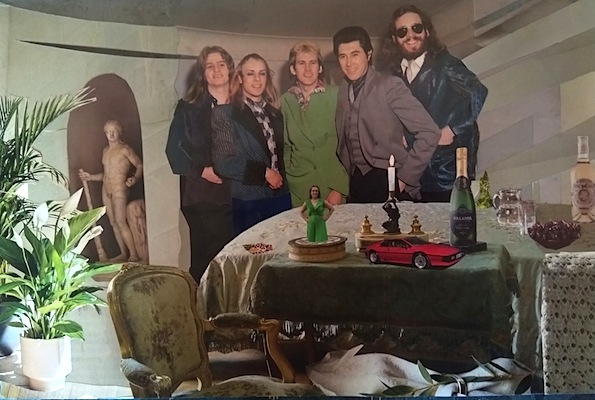 Phil Manzanera remembers how he joined the 1970s’ most exciting art-rock band. Interview by Tony Barrell

In 1971 I was in the band Quiet Sun, with the bass player Bill MacCormick. Then Bill went and joined the band Matching Mole, and I said: “What am I going to do now?” He said: “What about that band Roxy? I’ve seen an ad in Melody Maker saying they’re looking for a guitarist.” So I rang them up and I went over to this working man’s cottage in Battersea. And in this terribly tiny room there was Bryan Ferry, Eno, Andy Mackay, Paul Thompson and the bass player Graham Simpson. And someone said: “Okay, let’s have a jam.” In Quiet Sun I’d been playing this complicated music with funny time signatures, but this was just two chords. 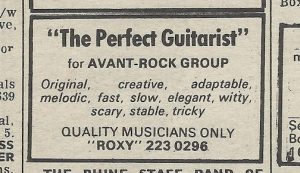 I thought: “This is weird.” I had a terrible cold and I was sneezing the whole time. They played me some demo recordings of their songs, which were brilliant. So I said goodbye — and I failed the audition. And they found a guitarist called Davy O’List, who had been in the Nice and was famous. I thought: “What a shame — it’s such a great band.”

Apparently, the guitar I took to the audition was the wrong guitar. They said that if I joined Roxy, I had to get a Fender Stratocaster. But I’d been conned by some shop in Tottenham Court Road – I’d gone in to buy a guitar and come out with a Gibson 335, a big semiacoustic.

Anyway, after that failed audition I kept bumping into Eno and Andy at concerts, and we became sort of friends. One day, Roxy were auditioning for the management company EG, in a bingo hall in Clapham, and I was in the audience. And suddenly the drummer Paul Thompson and Davy O’List have a punch-up on stage, fists flying. They play their numbers, and at the end of the audition Mark Fenwick of EG says: “Get rid of the guitarist.” I thought nothing of it.

I was in this boring job, getting Melody Maker every week and thinking, bloody hell, what am I going to do?

At that time, I had the only job I’ve ever had, as a temp: this travel company, Clarksons, had lost a million quid, and they hired a bunch of temps to work out where all the money had gone. Everyone there was making paper planes out of the invoices. I was in this boring job, getting Melody Maker every week and thinking: “Bloody hell, what am I going to do?”

And the phone went and it was Bryan: “Phil, do you fancy coming down and mixing the sound?” I said: “But I’ve never done that.” He said: “Don’t worry, Eno’ll show you how to do it.” Because at that point, Eno was mixing the sound off stage.

The night before I went over, I thought: “You know what? I’m going to learn their numbers, just in case I get a chance.” They’d done a session on John Peel’s show and I had it on tape. So I turn up at this derelict house in Notting Hill, and they’re pulling the banisters to bits to make a fire. And they say: “Davy hasn’t turned up. Do you want to have a go?”

I said: “How do the numbers go? Just show me once… One, two, three, four, boomf!” I played them immaculately and they were: “F***ing hell, this guy’s brilliant.” Then they said: “Would you like to join?” And they had a recording contract. I was just 21 and the others were all quite a bit older — they had cars and bank accounts. I went home to my mum, this little lady from Colombia, and I said: “You know all that education I’ve just had, A-levels and all that? Forget it — I’m joining a rock’n’roll band!”

I went out and bought a white Fender Strat – but first I had to go with my mum to the bank to borrow £100 so I could afford to pay for it. It was a lot of money in those days.

I had to share a room with Eno quite a lot on tour. He was very good with the ladies… I’ll say no more!

I knew Roxy were special. A lot of their friends were involved — like the designer Antony Price — and it was like the next generation of happening people: photographers, painters, designers. We’d wear very theatrical, futuristic stage gear, but we never told each other what we were going to wear. At the beginning of a tour, we’d just turn up: “You put your clothes on first.” “No, you put yours on.” Then someone would come out and you’d go: “Wow! Where’d you get that from?” 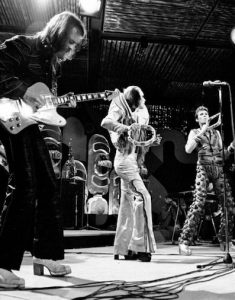 Touring cost us a fortune. We always wanted a proper show, with our own lights, and we couldn’t resist staying in the nicest hotels. But we were just a bunch of guys on 15 quid a week, and we were in debt for donkey’s years. And they didn’t get us in America. We’d start the set by swaying to electronic music, and the Americans would throw water bombs at us.

We weren’t really a band in the sense that the Beatles were: a bunch of people who grew up together. It was more like a collective. We didn’t hang out together the whole time. But I did have to share a room with Eno quite a lot on tour. He was very good with the ladies — I’ll say no more! It was very frustrating. And there was a lot of backgammon. I have this Super 8 film of Bryan and Andy having a frantic game at some airport, and the tour manager’s saying: “Get on the f***ing plane!” The game would be continued on board, and it would have to be stopped in the interests of a good band relationship.

Roxy’s always been a complex thing. There’s a strange dynamic, and the music comes from this interaction. It doesn’t work as a normal business model — I think we can only do five-year stints and then we self-destruct. Hang on — we re-formed in 2001… Oops! We’ve only got one more year. ♦

Comments for: THE BIRTH OF ROXY MUSIC