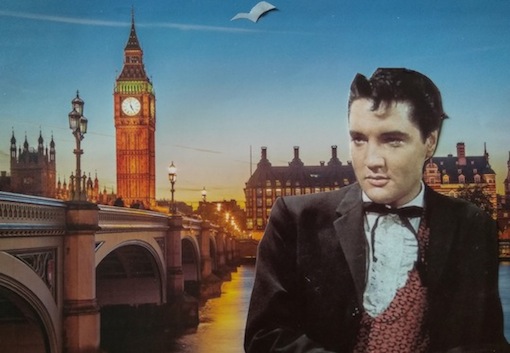 Did the singer Tommy Steele give Elvis Presley a secret tour of the UK capital in 1958? Tony Barrell investigates

It was once a universally accepted fact that Elvis Presley never set foot in London, England. Indeed, it was said that he only ever had the briefest glimpse of Britain, when he stopped at what is now Glasgow Prestwick Airport in 1960 during a flight from Germany to the USA (apparently the plane needed to refuel). But back in the Noughties an intriguing story leaked out of the showbiz vaults. One day in 1958, the story goes, he travelled to London for a single day and was shown round the city by Tommy Steele, the British rock’n’roller who was then regarded as his chirpy cockney equivalent.

The theatre impresario Bill Kenwright, who has staged many musicals (including This Is Elvis) and knows Tommy Steele well, told the story to the broadcaster Ken Bruce on the Radio 2 show Tracks of My Years towards the end of April 2008. According to Kenwright, it all began with an unexpected telephone call from Elvis to the gobsmacked Tommy, who had never spoken to the King of Rock’n’Roll before. Elvis fancied a day out in London, and please would Tommy be his guide?

Journalists who caught the radio show flicked through Tommy’s 2006 autobiography, Bermondsey Boy, to find a mention of the Elvis visit. The book jumps from Christmas 1957 to the summer of 1958, and the story isn’t in there. So they started badgering Tommy, then 71 years old, for confirmation and more details. The singer eventually sent a note to the Daily Mail, explaining: “What actually happened many years ago is something secret and memorable. It was an event shared by two young men sharing the same love of their music and the same thrill of achieving something unimaginable. I swore never to divulge publicly what took place and I regret that it has found some way of ‘getting into the light’.” 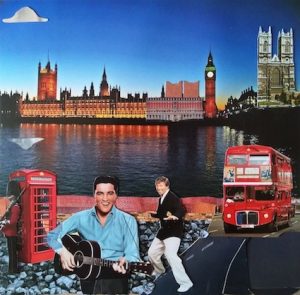 They really were young men: Elvis was 23 and Tommy 21. Tommy had already enjoyed a long string of British hits, including ‘Rock with the Caveman’ and the chart-topper ‘Singing the Blues’. Elvis’s recent smash hits had included ‘Jailhouse Rock’. It’s easy to imagine the pair having a rock’n’roll sing-song together.

Tommy didn’t say why he promised Elvis to keep the visit hush-hush for ever, but perhaps Elvis’s trip was unauthorised, or he imagined there would be an outcry from his British fans if it became public. He had come all the way to London without letting his admirers know. If only he had made his travel plans public, they could have come to see him, chatted to him, bothered him for autographs and maybe even obtained a kiss or a handshake. Maybe it was easier to spare his legions of fans the sickening feeling of disappointment.

The promise to Elvis evidently extended beyond his death, and Tommy’s 2008 note to the press had an interesting ending. “I can only hope he can forgive me,” he wrote. At that point, Elvis had officially been dead for more than 30 years. Does this mean that Tommy is a religious man who firmly believes in the afterlife? Less plausibly, was Elvis secretly still alive?

Suspicious minds have disputed the story that he came to London

Neither Bill Kenwright nor Tommy Steele has specified exactly when Elvis came over to London. The year 1958 was a busy one for the hip-swivelling rocker. He had received his draft notice from the US Army the previous December, and some recording sessions were hastily arranged in Hollywood before he was inducted into the military on March 24. He was subsequently stationed at Fort Hood in Texas, and from September he was occupied with army duties in West Germany.

Suspicious minds have disputed the story that he came to London. Shortly after the Radio 2 show, two of his associates, Lamar Fike and Marty Lacker – members of the famous “Memphis Mafia” who worked closely with the singer – announced that it was nonsense. “My apologies to Tommy, but it did not happen,” said Fike to the BBC. After Elvis travelled to Germany, Fike was “with him the whole time… He was confined to base.”

But that doesn’t fully account for January or February of that year. Elvis could conceivably have voyaged to England on one of the days when he wasn’t recording (assuming that he could momentarily escape his Mafia). Nor does it account for the 23 days of March before Elvis slipped into his uniform. The English weather in the first two months of 1958 wasn’t conducive to sightseeing: much of January was cold, wet and windy, and February brought heavy snow. But March saw the days warming up in the southeast of England, reaching the upper fifties (Fahrenheit) – reasonable weather for a stroll around Hyde Park or the Tower of London.

June is also a strong possibility. Elvis had two weeks’ furlough from the army then, and returned to his Graceland home and completed a quick recording session in Nashville. He may have had a spare day or two to travel to sunny London before resuming his army duties.

Of course, Tommy or Bill may have the year wrong. What if Elvis came over to London in 1959? He was based in Germany then, and he is known to have visited Paris twice in that year (and once again in 1960). The French capital is little more than 200 miles from London.

For all we know, Elvis may have sampled some vinegary jellied eels and warm brown ale

Fans of Elvis have told me that they don’t believe the story. In that case, they must believe either that Tommy Steele is a liar, or that he was somehow fooled into thinking that it happened – both of which are unlikely. I believe Tommy: I think he is an honest man, not known for elaborate hallucinations, and I accept the story that he welcomed Elvis to London. Among the sights the King saw were the Houses of Parliament, the River Thames and Buckingham Palace, along with plenty of stiff-backed English policemen and gleaming red telephone boxes. For all we know, he may have sampled some vinegary jellied eels and warm brown ale while Tommy regaled him with cockney rhyming slang. London is a wonderful city, and Elvis would only have been the richer for the experience. ♦

Comments for: DID ELVIS VISIT LONDON?