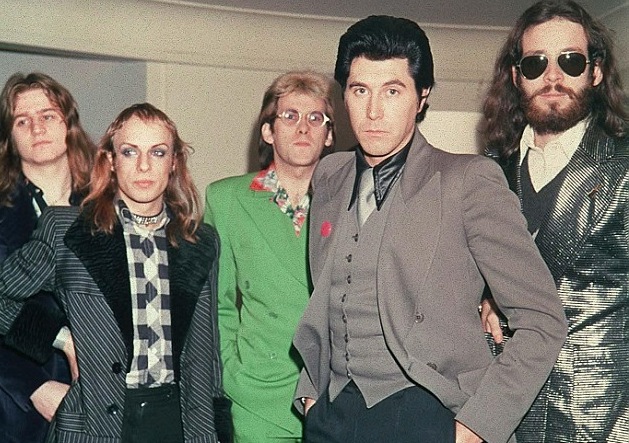 In 2001, as Roxy Music reunited for a new tour, Tony Barrell suggested what fans should wear to the concerts

When people trot out the old cliché of the 1970s being “the decade that taste forgot”, they are carelessly forgetting about Roxy Music. As if remaking and remodelling rock music weren’t enough, Bryan Ferry and his band basically showed pop stars and their fans how they should be dressing in the post-hippie age. Suddenly it was out with the couldn’t-care-less blues-rock uniform of washed-out denim, cheesecloth shirts and Silvikrin-shampooed hair, and in with such neglected notions as style, elegance, glamour and individualism.

In 1972, Ferry led the way with his blue-black lounge-lizard quiff and his spangly militaristic stage gear, while his sidemen – performers like Brian Eno and Andy Mackay, with pop personae as individually branded as any Spice Girl’s – paraded around like refugees from a rock’n’roll sci-fi movie designed by Salvador Dali. No other band before or since has raided the 20th-century dressing-up box with such artful abandon.

Whatever new outfit we’d put Bryan in, by the second week of the tour the imitators in the front row had all got one

Roxy gigs soon became populated by rows of Ferry, Eno and Mackay clones, wearing art-school or flea-market versions of the band’s latest togs. “I’d often look out at the audience before the concerts, and I’d see all the imitators in the front row,” recalls Antony Price, the fashion designer behind the band from the beginning. “Whatever new outfit we’d put Bryan in, by the second week of the tour they’d all got one. The kind of men he seemed to attract were detail-obsessed, as men often are.” Their girlfriends were often keen to join in too, many choosing to dress like the glamour models pouting from the band’s album sleeves.

When Bryan and his Ferry men announced their re-formation for a tour this year [2001], it signalled a revival of that dressing-up spirit. Turning up at a Roxy gig in the same shell suit or sportswear ensemble that you might throw on to see Chris de Burgh or the Lighthouse Family will simply not be acceptable. So what are you going to wear?

Men have a range of classic Ferry looks to choose from. There’s the obvious choice, the Bogart-style white tuxedo with bow tie, circa 1973. A black dinner suit would be a good alternative. A bolder option would be an animal-print number of the kind sported by Ferry and Eno on the first album sleeve – but watch your style here, as you could end up looking like a member of the Monster Raving Loony Party. You may be more comfortable in an army-style shirt like the one Ferry wore on the Siren tour in 1975; an authentic touch would be a black tie, tucked inside the shirt between two of the buttons. Just as casual would be an open shirt with a dark, white-spotted cravat – a Ferry look from 1974.

“The campest we ever got,” says Antony Price, “was the gaucho outfit for the Country Life tour. Bryan wanted to do it for a laugh. He didn’t give a shit, and he didn’t think it was incredibly important. He was so obsessed with the music, and we got the clothes together about a week before the tour – they were really just stage dressing. The boots I made him for the gaucho outfit were absolutely fantastic. They were very short, with a huge, wide funnel leg, and they were punched beige suede with wooden heels – absolutely beautiful. And he had a coiled rope hanging at his side.”

Bryan defended the costume (pictured) after he wore it, saying: “I wouldn’t back down on that, because there was a point to it. I could have had an easier passage playing safe, wearing a white tuxedo till it died the death, but I’ve always tried to change the image… The reason why I wore it was that you don’t see many people walking down the street like that. The gaucho bit was blowsy, romantic; it fitted the songs.”

The other truly snappy dresser in the Roxy ranks was Andy Mackay, who had his own, more 1950s-inspired wardrobe

It would be fun to see some gauchos in the audience. But you don’t have to copy the main man. The other truly snappy dresser in the Roxy ranks was the sax and oboe player Andy Mackay, who had his own, more 1950s-inspired wardrobe. “Andy looked like a male model,” says Price, “and he had a lot of his own stuff made, a lot of almost teddy-style stuff.” Mackay variously modelled bright suits, Cuban-heeled winklepickers, retro sunglasses, stringy bow ties and a pomaded DA haircut – Showaddywaddy with class, you might say. Doing an Andy would mark you out as a real Roxy connoisseur.

Women can still look fantastic by copying the album sleeves – though only the most daring will arrive in minimal underwear like the two hussies on the Country Life cover. Having said that, these upcoming summer concerts could be hot and steamy, so a skimpy jungle dress like Marilyn Cole’s on the Stranded sleeve may be perfectly practical. Or try a classical toga-style dress, like the babes throwing javelins on Flesh + Blood.

And don’t forget there are still second-hand shops to be raided for real 1940s clothes. Pillbox hats, like the one recently worn by Stella McCartney at a Chloé show, were a 1970s Roxy audience favourite. Another option is modelling yourself on the air-hostessy backing singers on the Siren tour, in their crisp blue uniforms with cream gloves draped over their shoulders – though going the whole hog will take serious dedication. “They wore corsets underneath,” recalls Antony Price, “which took their waists right in and pushed their tits out.”

Don’t get carried away – there is a danger you’ll upstage the band. Ferry, Mackay and the guitarist Phil Manzanera have a combined age of 159, and by the end of the band’s last incarnation in 1983 they had already toned down their stage duds. Wearing your best outfit and simply sticking a bright flower in your hair, or putting on a discreet piece of antique costume jewellery, will still get a thumbs-up from the taste police. Just wearing some mother-of-pearl would be a witty reference to the Roxy song of that name.

On the other hand, don’t be frightened of standing out. “Everybody is absolutely terrified of looking different these days,” moans Price. “People should stop worrying about whether or not they look the same as everybody else, and start worrying about not being exciting and different.”

You heard the man. Now go and ‘Do the Strand’, all over again. In style. ♦

Comments for: THE ROXY DRESS CODE