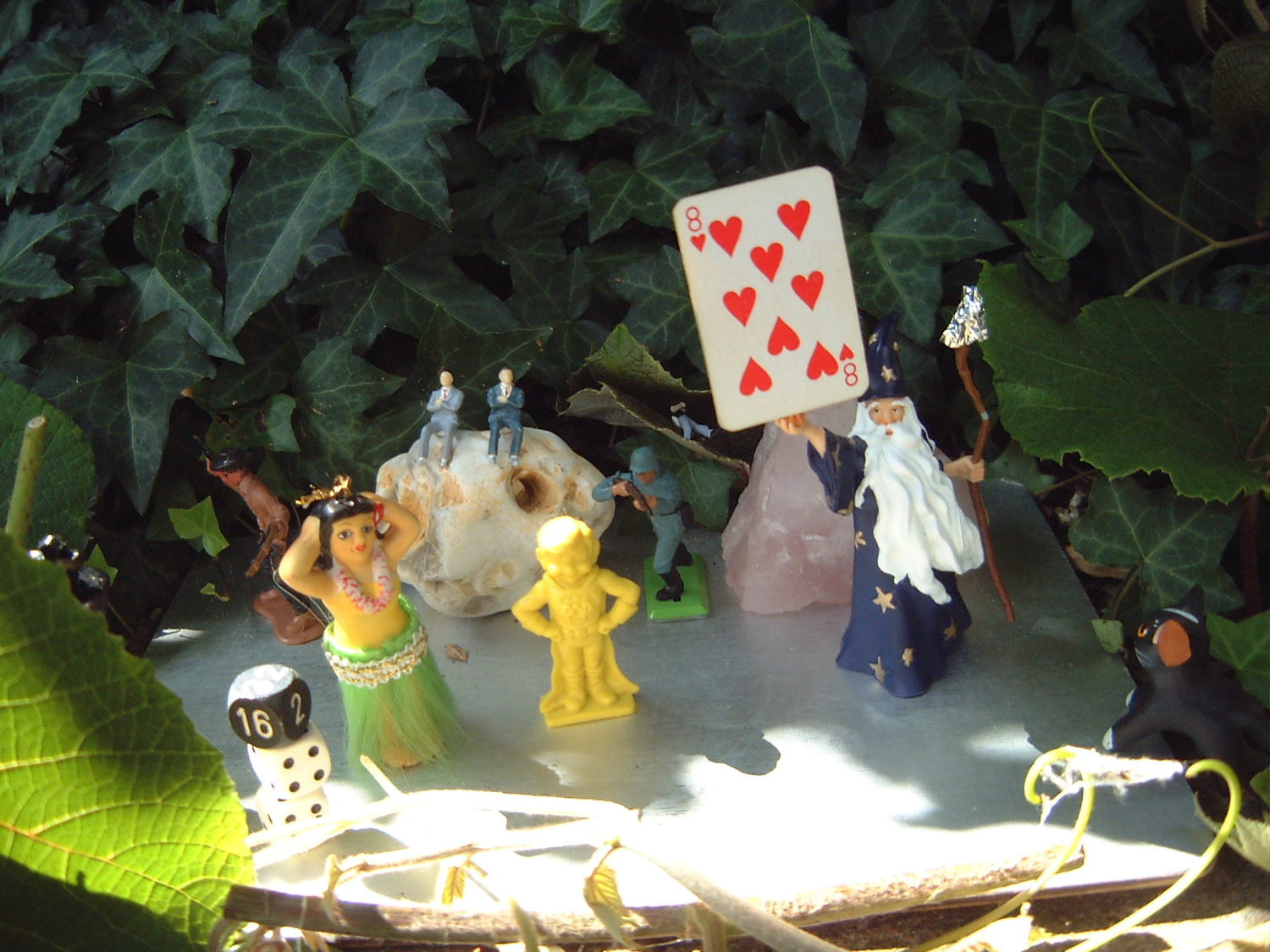 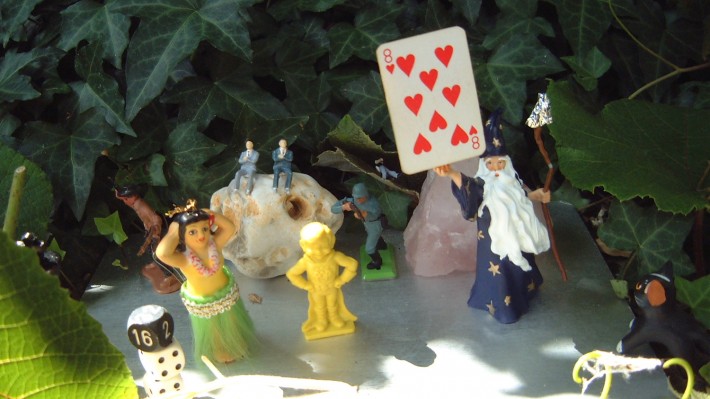 For thousands of British people, reading Tolkien isn’t enough — so they dress up and act out their own fantasy sagas. Tony Barrell explores the world of Larp, or live-action role-playing

Can this really be someone’s idea of a great Saturday night out? A group of us, dressed in heavy armour and carrying swords, spears and maces, are nervously feeling our way through a chilly, pitch-black forest in Surrey. Every now and then, without warning, a shadowy creature with a glowing mouth emerges, hissing, from the bushes. It is a ghost and it wants to kill us. If we want to survive – and I think we all do – we must lunge at it with our weapons and defeat it. Even when it’s down, the hissing resumes as identical malicious phantoms drift out of the foliage towards us. It seems never-ending, a self-replenishing phantasmagoria. And it’s very scary.

I wouldn’t mind so much, but by this stage I’ve been in the forest for more than six hours. Six hours! While ordinary people have spent the day shopping, gossiping and sipping cappuccinos, my co-adventurers and I have been tramping through mud and bracken and defending ourselves against hideous gargoyles wielding axes, masked “war dogs” the size of humans, and a monster who loomed out of a cloud of blue smoke and looked unsettlingly like a zombie Winston Churchill. And in our spare time we’ve dodged the crossbow bolts of snipers and attempted to negotiate with “the Shiva”, a sinister race of men wearing make-up and wimples who seemed eager to enslave us.

Young blokes with normal day jobs are playing characters with names like Bloodbuttock and Rumplebadger, some of whom have magic powers

This is the strange world of Larp – live-action role-playing – and nothing is as it seems. Young blokes called Tim and James – ordinary people with normal day jobs – are playing characters with names like Bloodbuttock and Rumplebadger, some of whom have magic powers or special warrior skills. Even this forest – Hurtwood forest, near Dorking – is playing a role: it is part of the Land of Eden. It shares little with its biblical namesake, being infested, we’re told, with Grells, Ferals and Minrals, whatever they might be.

“Live-action role-play is always difficult to describe to outsiders,” says Simon Colquhoun, 27, who runs the Spearhead group I am fighting with today. Two phrases that come close, says Colquhoun, are “cross-country pantomime” and “paintballing with swords”. It’s similar to re-enactment, in that we wear odd costumes and fight with latex weapons – “pulling” our blows to ensure nobody really gets hurt – but we are not re-creating real moments in history but enacting chapters of fantasy fiction. In this case we are breathing life into the picaresque imaginings of Colquhoun himself, a benign dictator who follows us round the forest, supervising us as we face each challenge, and maintaining radio contact with the people who have volunteered to play today’s cavalcade of scary monsters. “Rambler dramatics” would be another description: the fact that we all play roles makes it acting, but there’s no set script and no telling what any of us will say or do. Caked in mud after a few hours in this stinking wood, I come close to submitting myself as a slave to the Shiva, purely for a change of scenery. Then one of my fellow adventurers offers me a cold sausage and I cheer up a bit.

Mid-adventure, we encounter some ordinary people in the forest: a middle-aged couple walking their dog. “What period are you?” asks the man, cheerily, thinking we’re re-enactors. “Fantasy,” somebody replies. The man is even more confused when he notices that one of us – “Scratchy”, a Minral – appears to be dressed as a giant rat.

“Do you all have boring jobs?” chuckles his wife.

“I bet you’re all IT specialists, aren’t you?” says her husband.

Here are the popular prejudices surrounding Larp culture in a nutshell, say the Larpists. Initially people think it’s to do with the Sealed Knot or re-fighting the Battle of Hastings. (”Kids are the worst,” says one player. “They say, ‘Hello, are you Robin Hood?’”) Then, when they find it’s a group of adults acting out a fairy story, they conclude that they’re computer boffins and, by misguided inference, somewhere on the autism scale. In fact, only one of the team today is an IT expert; the rest work in careers such as banking, accountancy, nursing and animation; Colquhoun, the fantasy mastermind, used to run a children’s home and now works with homeless teenagers.

Caroline Stuckey, 31, who used to run the Larpists’ bible, a defunct national magazine called The Scribe, estimates that there are over 20,000 people role-playing in the UK. Up to 3,000 converge every summer in Derbyshire at the nation’s biggest Larp event, the Gathering – run by the Lorien Trust, a giant among role-playing clubs. It’s too easy to write all these people off as nerds, geeks, socially arrested pimple-heads. When I visit a Larp group in Margate, Kent, I meet a 29-year-old teacher called Ellen who has her own, very non-nerdy motivation for role-playing: it helped her regain her confidence after she was attacked by a man in the street. Now she fights back as a werewolf, protected by a mystical power: only silver weapons can harm her.

Magic is never far away. Ask Larpists about the roots of their hobby, and one name will usually be invoked: J R R Tolkien. That fertile-brained Oxford don got millions hooked on interminable quests by wizards and trolls for enchanted accessories. Then there was Dungeons & Dragons, the game that had indoor adventurers improvising their own magical stories using dice and cards. The birth of Larp – the precise moment when the weekend mages and goblins left the table-top and became flesh – is lost in the mists of time, but Larpists inevitably have their legends. “The story I’ve heard is that it settled arguments,” says Steve Bradshaw, 38, whose day job is managing the Skullduggery group that wages war in the caves beneath Margate. “People were rolling dice, and on one dice throw, a little elf, say, would beat a big Orc armed to the teeth. And it would be like, ‘No way.’ ‘All right, then – outside!’ And apparently that’s how it came about.”

In the early 1980s, a pioneering club called Treasure Trap started playing flesh-and-blood fantasy at Peckforton Castle, a 19th-century mock-medieval fortress in Cheshire. Various participants there went on to form splinter clubs, and British Larp was off and running. While many clubs – known in the hobby as “systems” – are hidebound by a Tolkienesque cast of wizards, elves and dark lords, others craft stories dressed as pirates or vampires, or gentlemen and ladies from the 1920s. As with all fantasy, the only limits are those of the human imagination.

You’re in a bunch of tourist caves, dressed in curtains with a rubber sword. How can you take it seriously?

Many systems are straight-faced about their adventures, but others are unafraid to introduce comedy. “Once, in this group called Curious Pastimes,” says Caroline Stuckey, “they had people dressed as nuns, and they had latex Bibles which they used as weapons. They were actual Bible-bashers!” At another event, she says, “There was a serious ritual being performed, and the ritualist suddenly came out with the words, ‘Near a tree by a river, there’s a hole in the ground, where an old man of Aran goes around and around.’” You know Larp is a truly postmodern activity when it quotes Nik Kershaw lyrics, from his 1984 hit ‘The Riddle’.

But having a laugh is not to everyone’s taste. “We have had people come along who don’t like our game because it isn’t at all serious,” says Steve Bradshaw in the Margate caves. “But you’re in a bunch of tourist caves, dressed in curtains with a rubber sword. How can you take it seriously?” The Skullduggery group’s goblins are “very Ali G”, says Bradshaw: “‘It’s ’cause I is green, innit?’”

The Spearhead group in Surrey seem to prefer terror over jollity. “The way we introduce fear into the system,” explains one of their members, Mac, 27, “is to get people to really care about their characters. When you’re running from a monster, you’re really scared because you don’t want your character to die.” If your character does cop it, you have to come up with a whole new role; worse, you have to pretend not to know the people you made friends with as the deceased character, and make friends all over again.

I’m in hiding, lying in a bush in that Surrey wood now, having run out of energy and courage. My colleagues are being chased by a dirty great ghost with a white face and black eye sockets, wielding a long blade and screaming his head off. It’s only Mac dressed up, but he does a great job of it. Foolishly, feeling apart from all the action, I decide to leave my hide-out – only to be confronted by this phantasm. “Arghhh! One on ’is own!” screams the ghost with relish, and starts killing me – softly – with his weapon. You see, in many of these Larp games you start off with a number of life points, and you lose one or more every time you’re struck by an opponent. Down to zero points, officially dead, I obediently lie on the ground. Two of my colleagues eventually find me and carry me out of the wood. I’m slightly worried they’re going to bury me, but we all go to the pub instead, where I am suitably revived. ♦

Comments for: THE LAND OF MAKE-BELIEVE