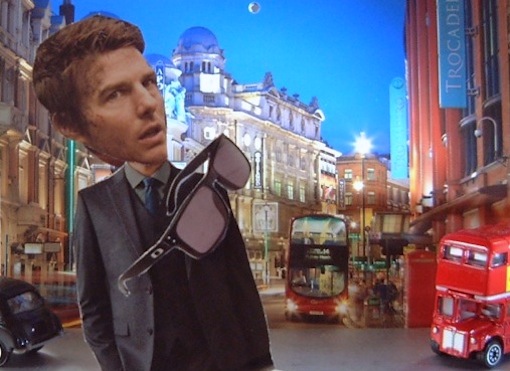 A London bus almost hit Tom Cruise. And he’s not the only celebrity who needs to look where he’s going, says Tony Barrell

On the Monday that began the month of December 2014, London shoppers were jostling each other and huffing and puffing as they padded up and down Regent Street in search of Christmas presents. “Next year, I’m doing the whole thing online,” said several of them, simultaneously but independently.

Many of the shoppers noticed that there were movie cameras, and other Hollywood clutter, scattered around them. Some of them recognised a man who was walking among them, who either wasn’t shopping or hadn’t had any purchasing success, because he was carrying nothing – just pacing around, almost aimlessly, wearing a smart grey jacket and flashing the occasional toothy smile.

Tom stepped off the kerb, and suddenly a big red London bus loomed out of the winter murk, threatening to mow him down

“It’s Tom Cruise,” whispered a couple of people. And they were dead right. Tom was in town to film snatches of Mission: Impossible 5. In fact, he was shooting right now, using these thronged West End streets as a location. At one point, Tom did something scary, which wasn’t in the script. He stepped off the kerb, as if to start crossing the street, and suddenly a big red London bus loomed out of the winter murk, threatening to mow him down.

The bus driver hooted at Tom, who did a nifty skippety-hop backwards to return to the pavement. It was an impressive thing to do with those short little legs, and his life was spared as a result. 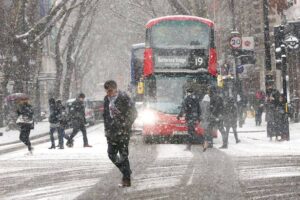 Now, when I was a boy, my father used to tell me to mind the roads. “Mind the roads,” he said. He repeated it a lot, like a mantra or a catchphrase, though I didn’t know what mantras or catchphrases were at that age. It was irritating and it made me roll my eyes a few times, but guess what happened whenever I had to cross a road – I heeded his words, and watched out for oncoming traffic before I left the kerb.

Tom Cruise’s daddy wouldn’t have said “Mind the roads” to his son, because he was American: he might have said “Check the highway” or something like that instead. I doubt very much if Tom received no safety guidance at all from adults as he was growing up. So he should know not to step blithely off the pavement (or the sidewalk, as he would call it) and risk death on one of the world’s most famous thoroughfares. He’s been to London before, too, so he ought to know about huge red buses and big black taxis, and rickshaws pedalled by unlicensed extortionists.

In 2013, Nicole Kidman left a swanky Calvin Klein fashion show in New York City and was knocked over by a photographer on a bike

One comfort for Tom, who wasn’t sure whether to look shocked or amused after his near-death experience, is that he’s not the only celebrity to have tasted danger as a pedestrian. One day in 2013, his ex-wife Nicole Kidman left a swanky Calvin Klein fashion show in New York City and was knocked over by a photographer on a bike, near the Carlyle hotel on the Upper East Side.

Decades before Nicole’s tumble, when Mel Brooks was a boy living in New York, the future film-maker was run over by a limousine as he recklessly whizzed around on roller skates at the corner of Hooper Street in Brooklyn. Mel ended up in hospital, but thankfully recovered sufficiently to make Blazing Saddles and a heap of other celluloid hits.

Just occasionally, being run over can end up becoming a positive experience. On January 18, 1975, Brian Eno was walking home after doing a spot of recording at Basing Street studios in London. It was cold and it was raining, and the pavement was so slippery that Eno fell into the Harrow Road, straight into the path of a taxi, which struck his legs and knocked him backwards so that his head hit a parked car. After being hospitalised for a while, clumsy Brian returned to rest up at his comfy flat in Maida Vale. And the story goes that it was during this convalescence, as the dismal London rain lashed his windows and he strained to hear some almost inaudible harp music on his busted hi-fi, that he conceived the idea of ambient music, and launched the next stage of his fascinating career.

I can’t see Tom Cruise creating anything innovative, or even finding a new path for his career, as a result of his London bus escape. But I’m glad little Tom wasn’t hurt. Next time I see him, I’m going to remind him to “mind the roads”. ♦

Comments for: TOM CRUISES FOR A BRUISING