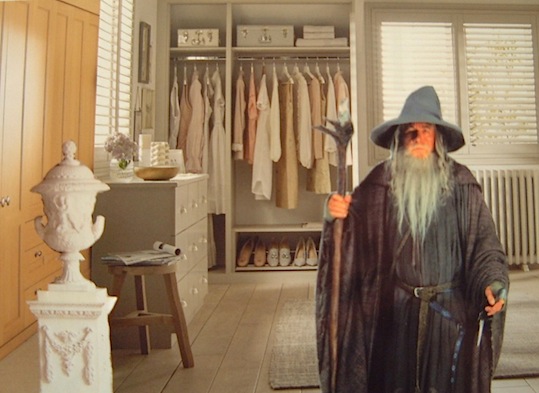 Why are wizards so popular? Tony Barrell discusses sorcery with Gandalf himself – Sir Ian McKellen

When Sir Ian McKellen turned up at a big comic and fantasy convention in San Diego, California, in the summer of 2000, he was embodying not one but two motion-picture characters. To the Tolkien fans he was Gandalf, the good wizard of The Lord of the Rings. To the Marvel Comics collectors, the 62-year-old British actor was the evil Magneto, scourge of the mutant goodies known as the X-Men. The two roles are connected – and not simply by the casting of McKellen.

Similarly, it is no coincidence that such conventions bring comic-book and fantasy-novel obsessives together. Wizards are basically superheroes – characters in apparently human form who use uncommon skills to help the good people around them. Just as the X-Men have a mission to protect ordinary mortals, and Superman watches over the citizens of Metropolis and beyond, so Gandalf intervenes when the folk of Middle-earth face trouble, using his magic as selflessly as Merlin did in the misty England of Arthurian legend. As JRR Tolkien once put it himself, Gandalf’s function is “to assist the rational creatures of Middle-earth to resist Sauron, a power too great for them unaided”.

Superheroes are incarnations of our yearning for supernatural help when the chips are down; wishful thinking made flesh. They are usually exotically costumed, probably to emphasise the fact that they are not like us. Gandalf and Superman first appeared within a year of each other in the 1930s – the former in The Hobbit and the latter in Action Comics – but while Superman flies around in an art-deco suit of primary colours, the anti-modernist Tolkien had his wizard carted around in fashions from the distant past. “He wore a tall pointed blue hat,” the author wrote, “a long grey cloak, and a silver scarf. He had a long white beard and bushy eyebrows that stuck out beyond the brim of his hat.”

These super-goodies tend to be outsiders of one kind or another, befitting their roles as dei ex machina. Superman falls to earth as a baby after blasting off from the alien planet Krypton. His chum Batman, though entirely human and lacking super-powers, effectively becomes an emotional mutant after seeing his parents gunned down in the street – an event paralleled in the life of JK Rowling’s young wizard, Harry Potter. And Gandalf, as Tolkien once explained, is “an angelos or messenger from the Valar or Rulers”.

Gandalf is an immortal. It’s not easy to play. I always thought of his age as early seventies

“Gandalf is an immortal,” McKellen tells me. “He’s been around for 7,000 years or more. It can be a bit daunting, that; it’s not easy to play. But it would be the same if you were playing Jesus Christ: I suspect you would play the man rather than the God-made-man. I always thought of his age as early seventies, and I thought the reverberations of his immortality would just have to take care of themselves. His manifestation is… well, he’s a bit of a tramp, really – a traveller, someone who’s living off the land, and not particularly tidy, doesn’t have many belongings.”

Before McKellen was cast in the role, the websites were fizzing with speculation and recommendations. Afterwards, the cyber pundits registered their approval or, in some cases, otherwise. Did he feel daunted by all these strong feelings about the character? “It was obvious that The Lord of the Rings was a classic, but what I hadn’t realised was the depth of interest, that there should be so many people – literally millions – who felt a personal relationship towards the material, and were very concerned that the film should be the one that they wanted to see. But actually, it didn’t feel that different from what one’s terribly aware of playing any classic. If you’re playing Hamlet, you’re terribly aware that initially you’re going to be judged by people who know the material extremely well, and who have seen many performances.

“There were long discussions about whether it was appropriate for me to be playing the part of Gandalf. Eventually I stopped, as far as possible, listening to all that, because it could have been negative. All I could do was just get on with doing what I could within the context of Peter Jackson’s production. My concern was to please Peter Jackson and Tolkien, not to worry too much about anybody else’s ideas.”

To find the correct voice for Gandalf, McKellen listened to Tolkien’s own readings from the books

The wizard’s appearance was a problem for a while. During the first screen test, his beard was too long and cumbersome for a wanderer who spends a long time tramping and riding around. McKellen accidentally assumed an assortment of roles before Gandalf appeared: “As we put together the appearance, we kept getting all sorts of people appearing in the mirror that didn’t seem quite right.” At points he resembled Shylock, Fagin, Rasputin, and Maharishi Mahesh Yogi, bringer of transcendental meditation to the Beatles. McKellen found he had to depart from Tolkien’s description and have the bushy eyebrows plucked. “Eventually – I don’t know what it was: the length of the beard seemed to be right and manageable, and once you popped the pointy hat on top of the wig, it seemed to be a Gandalf who was looking back at us. And then everything else fell into place physically.”

To find the correct voice, McKellen was aided by none other than the late author. “I listened to Tolkien’s own readings from the books, and he seemed to have a sort of Gandalf voice. It’s what we used to call a ‘cultured’ voice; it was a received-pronunciation, gentlemanly voice, and I adopted a little bit of that tone.”

Real pagans insist that magic should never be overused, that spells must always be cast responsibly and for goodness’ sake

To understand Gandalf better, the actor also worked with a woman who practises genuine witchcraft – of the white variety. This is interesting, as the character that Tolkien wrote has a pagan authenticity about him. The wizard demonstrates an admirable restraint when it comes to magic, only pulling his tricks out of the bag for the odd firework display, or when he and his colleagues are in a tight corner – as when the fellowship face death in a blizzard and he uses his staff to ignite a fire. Real pagan types insist that magic should never be overused, that spells must always be cast responsibly and for goodness’ sake.

Did McKellen think about any other famous wizards when he was playing Gandalf? “No,” he replies, “and if I did, I thought, ‘Well, I’m playing the best wizard.’ Of course, there’s always Merlin. But I think until Gandalf, the general perception of what a wizard was perhaps was a little bit undefined.” But does Gandalf really sit well in these cynical, suspicious times – an oddly dressed old geezer with a mysterious past, who likes to hang around much younger people, and sets a terrible example by smoking? “In the past, our leaders were often eccentrics and were treasured for that. These days, politicians tend to be turned out of the same mould, don’t they? They all go to the same tailor. Gandalf, thank God, doesn’t have a tailor.”

The magician’s eccentricities may be attributable to his human form, and not his inner self. As Tolkien put it, the wizards in his mythology “were incarnated in the life-forms of Middle-earth, and so suffered the pains both of mind and body”. One of his fallibilities is an occasional flash of old-age cantankerousness. In The Hobbit, Bilbo Baggins gives him an innocent “Good morning” and gets this in return: “What do you mean? Do you wish me a good morning, or mean that it is a good morning whether I want it or not; or that you feel good this morning; or that it is a morning to be good on?”

When literary or screen wizards are granted other human weaknesses such as incompetence, it’s a recipe for comedy. The children’s television show Catweazle took an 11th-century magician, magicked him forward in time to the present (the early 1970s) and played the whole thing for laughs. His spells often ended disastrously, prompting the catchphrase “Nothing works!”, and the humour was heightened by the fact that he was an extremely shabby and grubby old man, with a slimy toad for a supernatural pet. Walt Disney mined a related seam for the Sorcerer’s Apprentice sequence in Fantasia, only his Mickey Mouse wizard derived his incompetence from youth and inexperience rather than old age and temporal dislocation.

One of the best-loved wizards of the moment also tramps over comic territory. This is how the prolific Terry Pratchett described Rincewind in the first of his Discworld novels, from 1983: “Scrawny, like most wizards, and clad in a dark red robe on which a few mystic sigils were embroidered in tarnished sequins. Some might have taken him for a mere apprentice enchanter who had run away from his master out of defiance, boredom, fear and a lingering taste for heterosexuality.” Rincewind had left a prestigious academy of magic, Unseen University, with only one spell “after an unfortunate event”. Like the School of Wizards in Ursula Le Guin’s Earthsea trilogy, Pratchett’s university reminds us that magicians went to school long before Hogwarts opened its doors.

But wizards have journeyed far beyond the confines of books, films and television. Tattoos of men with long beards and pointy hats are much more popular these days than hearts with “I love Mum”, or Popeye anchors. And when people gather with their dice to play the role-playing game Dungeons & Dragons, they frequently take on the mantle of “wizard”. A book such as The Complete Wizard’s Handbook (published by Wizards of the Coast, Inc, in the USA) offers a glimpse into this arcane and esoteric world. This tome tells you that “A wizard must have human blood to be a conjurer. Therefore, humans and half-elves can specialize in this school, but elves cannot.” Or how about: “Once per week, the Savage Wizard can construct a small replicant of any single victim of his choice.” There are over 120 pages of this stuff.

Small replicants of wizards themselves can be bought in their thousands – and collectors do. The amount of metal, clay and plastic used to create sorcerous figurines over the years would probably fill the Crack of Doom in Mordor. Surely one of the most tasteful and treasurable creations is Wizard Bunnykins, a 5in-high magical brown rabbit in a purple robe and hat, produced as a “special edition” of 2,000 a few years ago by Royal Doulton and costing over £250.

McKellen himself now appears as a Gandalf doll. How does he feel about that? “Well, the idea that there should be representations of actors for collectors to keep is an old one,” he says. “I’ve got at home some Staffordshire pottery figures of actors playing Shakespeare parts; they’re from the 1850s, and they’re very much the equivalent of the dolls that you get today. And there have also been figures of me playing Magneto in X-Men, so I’m beginning to get a little bit blasé about it.” The idea of this sexagenarian thespian shooting up the doll charts – possibly even displacing Barbie – is just super. ♦

Comments for: COULD IT BE MAGIC?