It took guts for the Beatles to play on the roof in Savile Row – because they hadn’t performed in public for 885 days. Tony Barrell, the author of the first ever book about the rooftop concert, tells the story

The Beatles’ rooftop concert was a sensational surprise for many people. Only a handful of well-connected men and women were “in the know”, having been tipped off that the world’s greatest group would be blasting their music across the West End of London on Thursday, January 30, 1969. It became a notorious event, because it stopped the traffic, provoked complaints from the businessmen of Mayfair, and eventually attracted the attentions of the Metropolitan Police. But what is often overlooked is how courageous it was. Not only were the Beatles at the lowest emotional point in their career, having been squabbling amongst themselves, but they hadn’t played a live show for a very long time – not since their gig in Candlestick Park, San Francisco, on August 29, 1966.

It had been 885 days since they’d played a concert, and those 885 days unsurprisingly made them nervous. The world had changed, their fans had aged, and John Lennon, Paul McCartney, George Harrison and Ringo Starr couldn’t be absolutely certain that they could still cut it live. What if they tried and failed miserably, dying in a hail of bum notes and cruel audience laughter?

Yes, they had spent much of that January rehearsing at Twickenham Film Studios and in their basement studio in Savile Row. But the recordings of those sessions reveal that they weren’t always on wonderful form as a band at this point. Interpersonal relations had soured (the making of their recent LP, the White Album, had often seen band members recording in separate studios), and they were struggling to gel and recapture the old Beatles magic.

So there was a moment, before they finally walked out around lunchtime in Savile Row (with their guest keyboard player Billy Preston), when they nearly bottled out of the gig. They were humming and hahing, and Ringo was complaining about how cold it was, but John suddenly decided, what the hell, they should do it. Millions of people, including me, are glad they did.

When I started writing my new book, The Beatles on the Roof, I made an exhaustive and rather geeky study of the temporal context of the Beatles’ final public performance. I calculated that by the time of the rooftop concert, John and Paul had known each other for 4,226 days, having met at a church fete in Liverpool on Saturday, July 6, 1957. I looked at what the Beatles had been doing on January 30 in previous years. In both 1962 and 1963 they’d played lunchtime gigs at the Cavern in Liverpool. By January 30, 1964, exactly five years before the rooftop event, they’d come up in the world and were rocking the Olympia theatre in Paris. Three years later, their lives and their music had changed considerably after they’d stopped touring and started spending more time in the recording studio. On January 30, 1967, they were larking about in Knole Park in Sevenoaks, Kent, making promotional films for ‘Strawberry Fields Forever’ and ‘Penny Lane’.

Exactly 500 days before the rooftop gig, they filmed the striptease sequence for Magical Mystery Tour

It amuses me that exactly 500 days before the rooftop gig, the Beatles were involved in another controversial performance, not very far from Savile Row. It was September 18, 1967, and they were visiting Raymond’s Revuebar in Soho to film the striptease sequence for Magical Mystery Tour. The Bonzo Dog Doo-Dah Band played ‘Death Cab for Cutie’, and the Beatles watched rather self-consciously as the professional stripper Jan Carson got her kit off.

When they played on the roof in 1969, the Beatles were in the winter of their collective career, but it wasn’t quite the end. It was 233 days later that John told the others he didn’t want to be a Beatle any more – six days before their album Abbey Road came out. However, John’s statement wasn’t made public, and the huge “Beatles split” headlines didn’t appear until Paul revealed he had left the group on April 10, 1970. That was 435 days after the magnificently gutsy rooftop event.

You can read much more about the Beatles’ final public performance in The Beatles on the Roof, published by the famous Omnibus Press and available in all good UK bookshops. 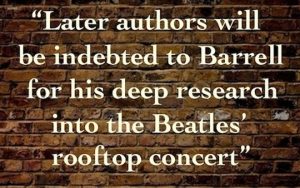 Watch this space for other blogs about the book. Oh! here’s one. And here’s another. ♦

Comments for: A DAY IN THE STRIFE