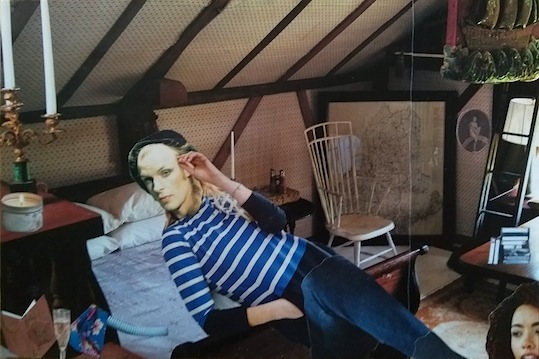 ‘The True Wheel’ is one of Brian Eno’s most mysterious songs – and it all began with a drug-induced dream. Tony Barrell reports

I’m fascinated by the idea of people writing songs while they’re asleep. That may sound ridiculous, but it has happened to various musicians over the years: they’ve gone to bed and heard an entirely new song in a dream. I like to call it oneiric songwriting, and the most famous example is ‘Yesterday’ by the Beatles. One day in 1964 or early 1965, Paul McCartney heard the melody in a dream, and played it on the piano after he woke up (pictured below). It’s a fine tune, so it’s understandable that for a long time he thought it might be an old standard that had popped into his sleepy head. He played it to friends and asked if they recognised it. They shrugged and said no, and he eventually concluded that it was a McCartney original. Fortunately, he discarded his early working lyric about “scrambled eggs” (which he had written while awake) and penned a set of lyrics worthy of the melody. 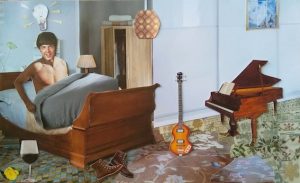 In 1974, a decade after Macca’s dozy songsmithery, Brian Eno took an inspirational trip to the USA, which would include a spot of oneiric songwriting. Having left Roxy Music the previous year and released his surprisingly tuneful solo LP Here Come the Warm Jets in January, the 26-year-old singer and “non-musician” had already begun thinking about the follow-up album. Wandering around San Francisco, he spotted some striking colour postcards in the window of a shop in the city’s Chinatown district, depicting a performance of a Maoist revolutionary opera called Taking Tiger Mountain by Strategy. He bought the cards and started carrying them around with him, having fallen head over heels in love with that title. For one thing, the S-word was right up his mountain pass. “Strategy interests me because it deals with the interaction of systems,” he later explained, “which is what my interest in music is, really, and not so much the interaction of sounds.” The postcards, with their idealised images of victorious Chinese revolutionary soldiers in stunning landscapes (see below), eventually set him thinking obliquely about a new approach to song lyrics: it might be a nice idea to use the first-person plural, writing about “we” and “us” instead of the much more common “I” and “me”. 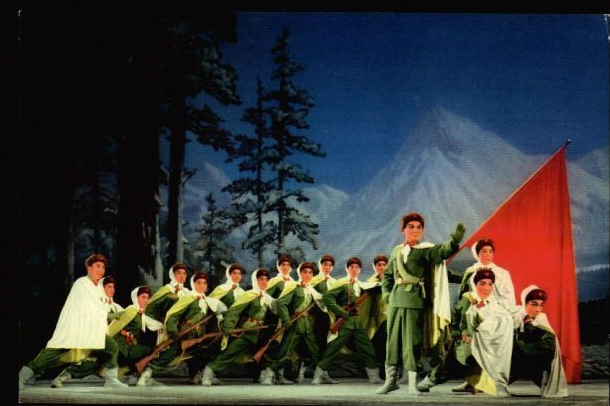 Visiting New York that sweltering summer, Eno stayed with a girl called Randi at the Drake Hotel in the Midtown district of Manhattan. Built in the 1920s, this imposing hotel (now demolished) had long been a favourite haunt of musicians: stars like Frank Sinatra, Judy Garland, Jimi Hendrix and the members of Led Zeppelin and Slade had spent the night here.

Back home in London, Eno’s old pals Roxy Music had begun recording their fourth album, Country Life – the second to feature his replacement in the band, teenage violinist and keyboardist Eddie Jobson. The very first Knebworth music festival had just taken place, with the Hertfordshire crowds grooving to the Allman Brothers, the Doobie Brothers, Van Morrison, the Sensational Alex Harvey Band and the Mahavishnu Orchestra.

In his hotel room, as the air conditioning hummed and yellow cabs rolled by below on 56th Street, Eno nodded off after taking some mescaline. This hallucinogenic alkaloid drug has long been popular with creative types looking for interesting experiences – among them writers as diverse as Aldous Huxley, Hunter S Thompson and Jean-Paul Sartre. And it didn’t disappoint Brian, who had a surreal dream about a bunch of girls, which included his friend Randi, serenading some sailors who had just come into port. The men weren’t exactly regular sailors: “They were sort of astronauts,” he clarified later, “but with all the psychological aspects of sailors.” (The Psychological Aspects of Sailors sounds like a great title in itself, as well as a good subject for discussion.)

The girls in the dream were singing: “We are the 801 / We are the central shaft.” When he returned to the real world, Eno jotted the phrases down and realised he had something interesting (to use one of his favourite words). It sounded meaningful, though he didn’t understand it, and it used the first-person plural. “I woke up absolutely jubilant, because this was the first bit of lyric I’d written in this new style.”

Those dream phrases would be reproduced verbatim on his next album, Taking Tiger Mountain by Strategy, which he recorded after returning to London. He developed the oneiric lyrical fragment into ‘The True Wheel’, a song that is noteworthy for other reasons too. Co-written by Roxy Music guitarist Phil Manzanera, the song is in the usual 4/4 time, and most of it relies on a standard “three-chord trick” of F#, E and B. So far, so unremarkable. However, listen to the music and you’re likely to notice that something funny is going on. Each of those three chords lasts for a single bar, and then the pattern repeats – which means that superimposed on the normal 4/4 rhythm is a three-bar cycle. This is sometimes known as “phasing”, and the effect here is strange and disorienting. After about a minute and a half, the music reaches a pleasing resolution with the “Looking for a certain ratio” section, which brings everything back to a normal four-bar cycle for a while.

Eno dashed off the rest of the lyrics in his usual fashion, throwing in euphonious phrases with little conscious regard for their sense

In addition to the 801 quotation, there are other traces of Eno’s New York mescaline dream in ‘The True Wheel’. Some of the lyrics are sung by a female chorus, credited on the record as “Randi + the Pyramids”. And the “sailors” are alluded to in the lines “And thus throughout two years we’ve crossed the ocean / In our little craft” (to which Randi and her mysterious Pyramids append the charming “row, row, row”) and in the reference to “the captain’s table”. But Eno appears to have dashed off the rest of the lyrics in his usual fashion, throwing in euphonious phrases with little conscious regard for their sense. Of course, there’s nothing wrong with that: much of the Beatles’ canon was created that way, and Procol Harum’s utterly baffling ‘A Whiter Shade of Pale’ is one of the most popular records of all time.

And it doesn’t mean the lyrics of ‘A True Wheel’ aren’t meaningful or interesting. There is some humour in there as well, characteristic of Eno’s earlier “song” albums: the idea that something as insubstantial as “a certain ratio” might have been left underneath a carpet is funny.

The earliest usage of “a certain ratio” that I can find appears in translations of the work of St Thomas Aquinas, the 13th-century Catholic theologian and philosopher – a source that would surely be well known to Eno, a voracious reader with Catholic origins. Aquinas used the phrase (or rather the Latin equivalent of it) while writing about Aristotle’s ideas on human senses. Towards the end of the song, Eno brings in tinkers, tailors and candlesticks, dredging up material from two other centuries-old sources: the rhyme ‘Tinker Tailor’, used by superstitious types when counting their cherry or olive stones after a meal, and the nursery rhyme ‘Rub-a-Dub-Dub’, which mentions “the butcher, the baker, the candlestick-maker”.

The song is known to have given at least two rock bands their names: 801 and A Certain Ratio

‘The True Wheel’ is known to have given at least two rock bands their names: 801, formed in 1976 by Eno himself with his old Roxy chum Phil Manzanera; and A Certain Ratio, the post-punk band formed in Manchester the following year. There is actually an American band called the Noisy Neighbors, which is pretty close to “nosy neighbours”. But it’s not true that Jonathan Richman’s Modern Lovers took their moniker from the song: they had already formed in 1970 (and were produced at one stage by Eno’s occasional collaborator John Cale, of the Velvet Underground).

A whiff of mystical mystery still clings to ‘The True Wheel’. Some bright spark noticed that if you spell out 801 in words, you get Eight Nought One, which abbreviates as ENO. (It could also be Eight Zero One, which is EZO, a Japanese word for “foreigner” among other things.) Long after he wrote the song, Eno said he had noticed some esoteric connections between 801 and the Kabbalah, the ancient Jewish mystical tradition. And Huxley did suggest in his book The Doors of Perception that mescaline has unexplained spiritual properties.

And where does that intriguing title come from, ‘The True Wheel’? It doesn’t appear in the lyrics of the song, and when I first heard it in 1974 I semi-consciously imagined it might be a reference to the wheel of a ship. Now that Eno has brought up the Kabbalah, it does sound rather Kabbalistic, and you can easily infer a connection with the powerful Tarot card known as the Wheel of Fortune.

Who was Randi, and where is she now?

But the phrase does have a more down-to-earth significance, well known to Sir Bradley Wiggins and his ilk. To keen cyclists, a “true wheel” is a perfectly straight wheel, one that doesn’t show the slightest wobble from side to side as it spins on its central shaft. And I’m reminded that the young Brian Eno could often be found exploring his native Suffolk, looking for fossils, on a bicycle.

What does it all mean, Brian? Who was Randi, and where is she now? And does anyone else have any theories, thoughts or suggestions about ‘The True Wheel’? If so, please leave a comment below. But stay off the mescaline.♦

You can listen to ‘The True Wheel’ here. 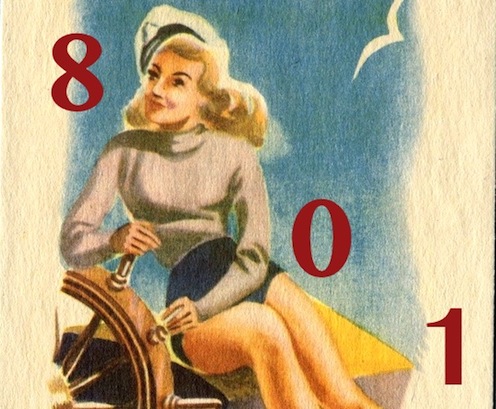 Comments for: WHEEL OF FORTUNE