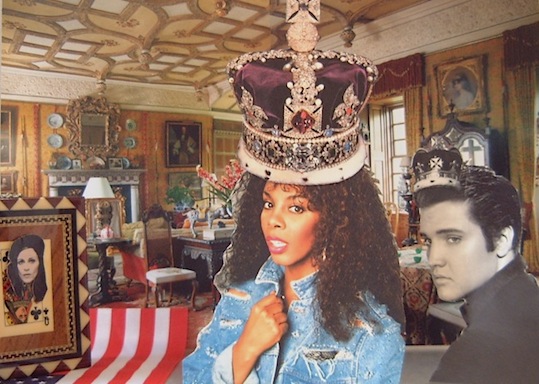 Why is the music business full of royal titles – from the King of Rock’n’Roll to the Queen of Disco? Tony Barrell reports

Successful musicians can be on the receiving end of all kinds of accolades – from platinum discs to Grammy awards and even British knighthoods or damehoods. If American artists are extremely popular and influential, they will sometimes have regal titles bestowed on them – the Queen of Soul, for example (Aretha Franklin), or the King of Pop (Michael Jackson).

Many Americans are hugely appreciative of British royalty, and perhaps to make up for an absence of crown jewels and bespangled horse-drawn coaches in their own country, they have created their own pseudo-monarchy in their music industry. Elvis Presley was crowned in the 1950s as the King of Rock’n’Roll. After selling throneloads of records, Madonna became the Queen of Pop, though she never shared a four-poster bed in a palace with Michael Jackson, entertaining while that would have been. The Queen of Gospel was Mahalia Jackson, Tina Turner has been called the Queen of Rock’n’Roll, and the King of Reggae was the Jamaican legend Bob Marley.

One of the most disputed titles is King of Country Music, with America apparently unable to decide who is the twangiest male singer of all time. Is it George Strait, Roy Acuff, Johnny Cash or Charley Pride? People spend much of their lives arguing the toss on the internet when there are probably better things to do. Most seem to agree that the Queen of Country was Kitty Wells, the pioneering 1950s chart-topper from Nashville.

These titles have usually been minted by anonymous publicists or little-known writers, but have been accepted enthusiastically by the public, who like a bit of glitz, and by journalists, who are grateful for alternative names to save them from putting “Presley” or “Madonna” in every fourth sentence of their copy. But a long list of kings and queens would be unimaginative and boring, so other honorifics have been given to top artists as well. James Brown was dubbed the Godfather of Soul, Iggy Pop became the Godfather of Punk, while Nina Simone was the High Priestess of Soul, in spite of her distaste for musical pigeonholes. Cher is so divine that she is known as the Goddess of Pop. When George Jones and Tammy Wynette were married and lived in a big white house, they were known as the President and First Lady of Country. The amazing Bessie Smith was the Empress of the Blues. And one of the best titles of all went to the songwriter Willie Dixon from Mississippi, who was declared Poet Laureate of the Blues.

Jazz has had its self-appointed aristocracy, with bandleaders like Duke Ellington and Count Basie, while the shapeshifting rocker David Bowie entered the ranks of the nobility via his own lyric in the song ‘Station to Station’ mentioning the Thin White Duke. Bruce Springsteen, ostensibly the voice of blue-collar America, settled for “the Boss” – ranking only slightly higher than the Secretary or Filing Clerk. And some formidable women have had to accept mere maternal status: Ma Rainey as Mother of the Blues, and Maybelle Carter as Mother of Country.

Donna Summer was saddled with “Queen of Disco”, which might have sounded nice in the 1970s but has a distinct naffness about it now, and doesn’t begin to encapsulate her marvellous voice or the generic variety of her many hit records. But she was luckier than many top-selling British artists, who have never been awarded any crowns, though some have been knighted or given medals by the monarch, and a few have picked up some informal titles. Cliff Richard was the Peter Pan of Pop for a while – not because he fought pirates and hung around with fairies, but because he didn’t appear to be ageing as he entered his late forties. Journalists have invented various catchy appellations for the art-rock innovator Bryan Ferry, including “King of Cool” and “Sultan of Suave”, but an official title has never stuck.

High-ranking titles for musicians appear to differ from those of true British royalty or aristocracy, in that they are not passed on to successors after the deaths of their original holders. In 2009 there was a story that Kanye West had unilaterally seized the position of King of Pop after the death of Michael Jackson, but that turned out to be a fiction circulated by a mischievous website.

Not all the musical bases have been covered, and there are plenty of fresh new titles to be dished out. Who fancies being remembered as the Viscount of Grunge? What about the Pharaoh of Funk, the Duchess of Grime or the Archbishop of Rockabilly? ♦