Where does the word ‘litterbug’ come from? Tony Barrell investigates

When people throw things away, they either do it with consideration for their fellow human beings or they do it carelessly, thoughtlessly or selfishly. The latter group are often known as “litterbugs”. These are the people who drop their unwanted food packaging in the street, on buses and trains, in parks, on beaches and in various other public places for the rest of us to enjoy.
I like the word “litterbug” – I think it’s fitting that the “bug” part reduces the idle rubbish-chucker to the status of an insect. Of course, litterbugs are actually worse than insects: when was the last time you saw a wasp throwing a Styrofoam coffee cup out of a moving car, or an ant stubbing out its cigarette on the pavement?

“Litterbug” isn’t a terribly old word – nothing like as ancient as “slob” or “loser”. It was coined in the 1940s, when posters were plastered all over the New York subway to remind people how to behave properly on public transport. This was the Subway Sun series of posters, taking the name of a fictional newspaper and featuring cartoons of travellers behaving badly. The cartoons were originally drawn by Frederick G Cooper, but in 1946 a female artist called Amelia Opdyke Jones took over the job. One of her posters (see below) shows a woman staring in disgust as a man throws trash on the ground, and the slogan reads: “nobody loves a litterbug”. 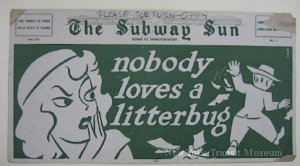 Discussing her work in the 1960s, “Oppy”, as she was known, explained that she simply adapted the name of a popular swing dance to create the new word. “Jitterbug was a popular expression at the time,” she said. “I just changed the letter as part of a clean-up campaign.” Her posters would have been seen by many millions of subway users, giving her neologism the chance to spread like wildfire. The word became so popular in the USA that in 1961, Walt Disney Productions created a short Donald Duck film entitled The Litterbug.

The phrase “litter lout” was already in use in the UK when Oppy created her new word – examples can be found as far back as the 1930s – but “litterbug” appears to have travelled across the Atlantic too (very possibly with the help of Donald Duck), and the word was frequently used by the Keep Britain Tidy campaign. Oppy had also coined the word “gumbug” to describe those annoying people who leave discarded chewing gum on the ground, though it didn’t catch on half as well as “litterbug”.

It would be wonderful to shake Amelia Opdyke Jones’s hand and thank her for this colourful addition to the English language. Unfortunately, that’s not possible, as she died in 1993, at the age of 80, at her home in the borough of Sea Girt, New Jersey. To this day, litterbugs are fiercely frowned on in this pretty East Coast resort. ♦

Tony Barrell is a writer, pop historian and etymologist who has investigated other popular expressions, such as “hunky dory“, “hanky panky“, “Planet Zog“, “over the moon“, and “laughing all the way to the bank”.

Comments for: THE LITTER PEOPLE