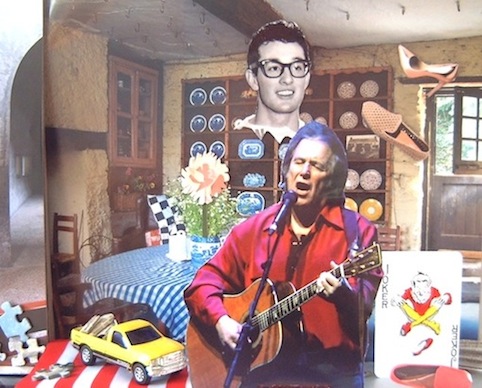 What is Don McLean really singing about in his most famous song? As the singer sells his original handwritten lyrics for a pretty penny, Tony Barrell takes a peek

‘American Pie’ is one of the most talked-about songs ever written. All that stuff about the Jester stealing the King’s crown, and Jack Flash sitting on a candlestick – what does it all mean? McLean recently sold his original scribbled lyrics for ‘American Pie’ on the auction block, and it has been suggested that they will solve many of the song’s enduring mysteries.

I’m sorry, but that’s not going to happen. When songwriters sit down and write lyrics, they don’t provide helpful footnotes. McLean didn’t put little numbers by his verses and write a handy list of explanations at the bottom of each sheet. Mostly, all the anonymous buyer has received are a bunch of words we already know very well, but in Don McLean’s handwriting. The auction house promised some “unpublished deleted sections” in the manuscript, but I think these are more likely to raise new questions than provide answers.

Anyway, thanks to decades of detective work and speculation, we already know quite a lot about this song. We know that it’s McLean’s tribute to his rock’n’roll hero, Buddy Holly, and recalls how 13-year-old McLean was working as a paperboy in February 1959 when the news broke that Holly had been killed in a plane crash. Young Don actually read the news when he cut open a stack of newspapers, and he had to deliver all these publications telling of his idol’s tragic demise.

Taken as a whole, the song appears to address the deterioration, as McLean saw it, of American culture and society through the 1960s. Many pundits agree that “The Jester”, who sings “for the King and Queen in a coat he borrowed from James Dean”, is Bob Dylan, though they disagree about whether the coat is a black leather jacket or a red windcheater – both of them worn at various times by Dean and Dylan. When McLean recorded the song, in New York’s Record Plant studios on May 26, 1971, Dylan was in the news again, having just celebrated his 30th birthday. 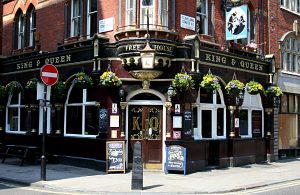 The King and Queen may not be a reference to people, but to a place. Is it more than coincidence that Bob Dylan’s very first gig in Britain was at a lovely old London pub named the King & Queen? He was a little-known 21-year-old folk singer when he played this drinking hole (pictured above) on the corner of Foley Street and Cleveland Street in Fitzrovia on December 23, 1962. The pub still stands today, and proudly displays a fuzzy photograph of Bob performing on the premises with his guitar and harmonica.

“The Sergeants” who play “a marching tune” in the song are very likely to be the Beatles with their 1967 album Sgt Pepper’s Lonely Hearts Club Band, a record that was a big influence on McLean, and the “sweet perfume” may be the pungent pong of marijuana. The Jester appears again, “on the sidelines in a cast”, which has been interpreted in at least two different ways. Some people say it’s a reference to Bob Dylan’s appearance on the star-studded cover of that Beatles album, but it has also been suggested that the “cast” is a plaster cast that Dylan wore after his motorcycle accident in 1966 (though there is no evidence that any part of his anatomy was set in plaster).

“Jack be nimble, Jack be quick” is believed to be about JFK acting swiftly in the 1962 Cuban missile crisis, though the “Jack Flash” verse clearly addresses the murder at the Rolling Stones’ 1969 Altamont concert, and that mention of a candlestick brings to mind the Beatles’ final concert to paying punters at Candlestick Park. The “girl who sang the blues” is widely identified as Janis Joplin. References to the Devil and the Holy Trinity have encouraged evangelists to link the ditty with Revelation and Armageddon, and there are whole websites flogging this bible-bashing take on the ditty.

Perhaps we shouldn’t be reading too much into ‘American Pie’: McLean has said that he wrote the song rather quickly – indeed, that it seemed to write itself. There’s no need for Dan Brown to start cobbling together a bestselling novel about its encoded profundities. 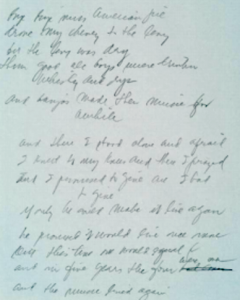 Nevertheless, McLean’s handwritten lyrics (right) do shed an itsy-bitsy glimmer of new light on the composition. They clearly show the phrase “whisky and rye”, which scotches a theory that McLean sings “whisky in Rye”, referring to a place by that name near his home town of New Rochelle in New York state. Lexicographers and pedants might also find it interesting that he spells “whisky” the British way – the American spelling is usually “whiskey”.

And McLean’s handwriting raises new questions about the line “Drove my Chevy to the levee”. A levee, as citizens of New Orleans and fans of Led Zeppelin know well, is an embankment to prevent the overflowing of a body of water. But the singer has actually written the word as “levy”, suggesting either that he couldn’t spell the word properly, or that he meant something else entirely. It has been claimed that this is a reference to a drinking establishment that once stood in New Rochelle, but locals there recall that its name was spelled “the Levee”, not “the Levy”.

McLean has been cleverly cagey over the years about the meaning of his best-loved song: he surely understands that if he preserves the mystique, he keeps people talking about it and buying his records. In October 2015 he turned 70, and it’s wonderful for a man of that age to receive so much attention. Back in the 1970s, when the song made him a star overnight, the attention was a bit of a nuisance. “I was overwhelmed by all of the activity,” he later recalled. “Suddenly I had people going through my trash and stalking me…”

Comments for: THE AMERICAN PIE ENIGMA