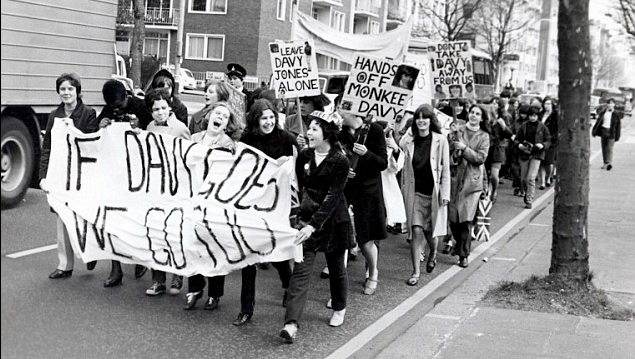 In 1967 a crowd of distraught Monkees fans demonstrated in London, trying to stop Davy Jones from being forced to fight in Vietnam

In the spring of 1967, the Monkees’ considerable army of fans received appalling news. Davy Jones, frequently voted the most popular member of the band, had been selected to put his life on the line for the USA. He was being called up to fight in the Vietnam War. The fans’ horror was mixed with confusion and disbelief. “But he’s British!” people exclaimed. “He’s not American: he was born in Manchester.” Indeed, Jones was so British that he had even played Ena Sharples’ grandson in Coronation Street before becoming the only “limey” in the manufactured ’60s band.

The news was splashed across the front page of the March 11 edition of Melody Maker, which reported that the 21-year-old star had received his draft papers and was just three weeks away from a US Army medical examination. The paper explained that although he was still a British citizen, he was eligible to fight because he lived and worked in America. The Monkees’ London publicist, David Cardwell, told the paper: “Obviously, Davy doesn’t want to go, but he certainly won’t kick if he is called up. He has no plans to appeal against it, as far as we know.”

Monkeemaniacs weren’t simply concerned that this could be the end of the group as a recording and performing unit. The Vietnam War had already killed thousands of US soldiers, and Jones was now at risk of becoming another casualty. Monkees Monthly magazine offered hope, reporting that two of his bandmates, Mickey Dolenz and Peter Tork, had previously been rejected for military service. Dolenz’s eyesight hadn’t been good enough, and Tork had “struck an understanding with the draft board: ‘They thought I was crazy too!’” But the American magazine Teen Life heightened fans’ fears by revealing that Jones had been classified 1A by his local draft board in California, “the most draft-eligible classification there is”. 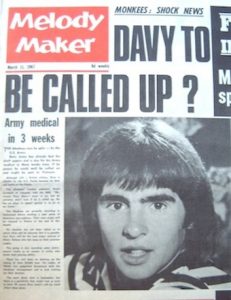 British fans refused to sit back and leave their hero’s fate in the hands of the American military bureaucrats. They started a petition, collecting 2,000 signatures from people opposing Jones’ recruitment – no mean feat in the days before the internet and social media. Linda Hards, a Monkees enthusiast in Twickenham, rallied fellow female fans for a protest march in central London, and on Wednesday, April 5, crowds of girls congregated at Marble Arch. Normally they would have been at school, but this was the second week of their Easter holiday. The girls set off down Park Lane, chanting and singing and carrying home-made banners with messages such as “Leave Davy Jones Alone”, “Don’t Take Davy Away From Us” and “If Davy Goes We Go Too”. After skirting the eastern edge of Hyde Park, they turned left towards their destination, the US Embassy in Grosvenor Square, where Linda handed over the petition and a letter addressed to President LB Johnson.

It was a good-natured and well-behaved demonstration, smaller and less angry than later London protests against the Vietnam War in 1967 and ’68. Whether the girls’ resourceful action had a bearing on the draft board’s decision is unknown, but Jones was spared. It has been claimed that he was exempted because he had his father to support back in England, but he later admitted that he took steps to become physically ineligible. “I found out that being as short as I am, five-foot-four, you had to weigh over 104lb. So I went down from my nine stone to 99lb.” At the medical he was stripped naked and prodded, and when he stood on the scales “this big guy said to me, ‘Boy, you’re a 99lb weakling.’”

Life returned to normal for the Monkees, if playing in a fanatically adored ’60s band with their own TV comedy series could ever be considered normal. They played three sold-out concerts at Wembley that summer, and went on to have hits with ‘Pleasant Valley Sunday’ and ‘Daydream Believer’ as Davy Jones enjoyed eating proper meals again. ♦